Getty Pascal Siakam plays for the memory of his late father.

Pascal Siakam’s father, Tchamo Siakam, died in a car accident in 2014, but his memory lives on through his son. After a career game by Pascal in Game 1, the Raptors forward admitted that he was playing for something bigger than himself. Pascal’s story is unique as he is from Cameroon and did not start playing basketball until he was almost 18 years old, per ESPN.

While at New Mexico State, Pascal received a call from his sister, Raissa, that their father had been killed in a car accident. Tchamo was involved in a two-car accident and was taken to the hospital. Pascal’s father survived for four days but later died of internal injuries, per ESPN. Tchamo was the former mayor of Makenene, Cameroon.

Due to complications, Pascal ended up missing his father’s funeral for fear that he would not be able to return to America. ESPN detailed the difficult decision.

Siakam centered on only one thought: I need to go home. James had already booked his flight to Douala, but Pascal had applied for a new visa that was still being processed. If he flew to Cameroon, there was a strong chance he would not be able to return to the U.S. without the proper paperwork. “My brothers are saying, ‘You can’t come.’ My mother says it, too,” Pascal says.

New Mexico State coach Marvin Menzies, who had lost his own father two years earlier, rushed to his player’s side. He made some phone calls, but it quickly became clear that Siakam’s best option would be to make the heart-wrenching decision to miss his father’s funeral. If he went home to Cameroon, he risked losing his scholarship and his future as a potential pro prospect.

After Pascal Siakam’s Historic NBA Finals Game 1 Performance, He Noted That He Plays “For Something Bigger Than Basketball”

If you look down at Pascal’s shoes, you can often see “RIP Dad” written on his sneakers. It is a tradition that started when he was forced to miss his father’s funeral. After one of the biggest moments of his career, Pascal cited his dad as part of why he was able to find success in his first NBA finals appearance.

“People always tell me ‘I know he’s proud of you,'” Pascal said, per The Canadian Press. “I kind of want to hear it from his mouth, it would be really cool. I have a bigger purpose. I play for something bigger than basketball.”

When Pascal was coming out of New Mexico State, he noted his NBA dreams were part of a fulfillment of goals he used to discuss with his father.

“This is for whole family — that’s what drives me — but most of all for my dad,” Siakam explained to NBA.com. “I still think about the conversations he had with me and my brothers. He was so excited talking about basketball, and the NBA.” 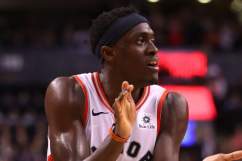