Sarah Stier/Getty Images Zion Williamson was officially welcomed into the NBA on Thursday night when the New Orleans Pelicans selected him number one overall in the NBA Draft.

Welcome to the roundup of must-see sports headlines from Thursday, highlighted by Zion Williamson being taken number one overall by the New Orleans Pelicans in the NBA Draft.

We also take a look back on the group-clinching victory by the U.S. Women’s Soccer Team and a professional golfer being disqualified for… get this… running out of golf balls.

All this and more as we get you up to speed with the sports world on this Friday!

Emotions were flowing on Thursday night at the Barclays Center in Brooklyn as the NBA ushered in its newest generation of talent.

The phenom forward out of Duke, Zion Williamson, was drafted number one overall by the New Orleans Pelicans. Williamson took the college basketball world by storm this past season, averaging 22.6 points and 8.9 rebounds per game. The 18-year-old freshman played under the spotlight all year on his way to winning the Wooden Award, for being named the nation’s top player. 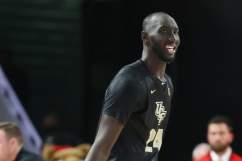 Williamson will now be the focal point of the Pelicans’ franchise, which agreed to trade their All-Star big man Anthony Davis to the Los Angeles Lakers last week.

Rocking a fresh and fashionable white suit, Williamson gave an interview to ESPN after he was drafted and became extremely emotional while speaking about the impact his mother had on him and the sacrifices she made to get him to where he is today.

"I wouldn't be here without my mom. She did everything for me."

What a moment for Zion Williamson, who shed tears after being drafted No. 1 overall. #NBADraft pic.twitter.com/WBVSRPr04K

There were no surprises with the second and third picks with Ja Morant from Murray State being drafted by the Memphis Grizzlies at #2 and RJ Barrett from Duke being selected by the New York Knicks at #3.

Morant exploded onto the scene in this year’s NCAA Tournament, leading the Racers to a first-round upset of Marquette and improving his draft stock mightily. The Grizzlies had cleared the way for Morant on Tuesday as they agreed to trade their point guard Mike Conley to the Utah Jazz.

Meanwhile, Barrett got his wish to play for the Knicks. The sensational Duke freshman who played alongside Williamson on their way to the Elite 8 had an emotional moment with his father after he was drafted. He spoke about his grandfather being a huge Knicks fan and how he would tell RJ that he knew he’d play for the Knicks someday. “That was crazy,” said Barrett. “That was one of the reasons why I was crying, because [my grandfather and I] used to watch the Knicks growing up and he would always tell me I was going to be a Knick.”

Shortly before the draft began, the Atlanta Hawks shook things up by trading up to acquire the #4 overall pick from the Pelicans, in which they took Virginia forward De’Andre Hunter. In return, the Pelicans received the #8, 17, and 35 picks in this year’s draft as well as a heavily protected Cleveland first-round pick in 2020, sources said. The Pelicans also agreed to send Solomon Hill, the #57 pick in this year’s draft and a future second-round pick to Atlanta as a part of the deal.

The U.S. Women’s Soccer Team got off to a quick start in the group-deciding game with Sweden and never looked back. Lindsey Horan scored for the defending World Cup champions in the third minute and Tobin Heath forced an own goal early in the second half in the 2-0 victory that won Group F.

Was there a cost in the win over the team that had knocked them out in the 2016 Olympics? American star forward Alex Morgan was fouled hard late in the first half and was slow to get to her feet. She was eventually replaced at the start of the second half. Her coach Jill Ellis would address the media after the game, saying “Alex took a knock in the first half. And I just think it was more of, ‘Let’s be smart about this’ in terms of what we did.”

The U.S. team, who has yet to be scored on in this World Cup, will face Spain in the Round of 16 on Monday afternoon at 12pm ET on FS1.

OUT OF BOUNDS: Professional Golfer Disqualified for Running out of Golf Balls During Thursday’s Round

What a first round for golfer Clement Berardo on the Challenge Tour in Spain:

One of those days! pic.twitter.com/cOxEjyRlpk

If you’ve played the game of golf, you’ve hit a wayward shot before, so we can all commiserate with what professional golfer Clément Berardo experienced on Thursday. Playing in the opening round of the Challenge Tour’s Andalucia-Costa del Sol Match Play 9 in Spain, Berardo was disqualified from the event after losing his final golf ball on the 16th hole.

The disastrous day got off to an inauspicious start for the 32-year-old Frenchman when he recorded a quadruple-bogey 9 on the first hole. Berardo was 10-over par at the time when he lost his last ball and was forced out. The rules call for a golfer to be disqualified once they are left without any golf balls in their bag.

The one positive about the early DQ – Berardo will have a chance to get in some extra time at the range this weekend.

DON’T MISS THESE STORIES: Rounding Up the Top Sports Headlines

Rays receive permission to explore possibility of a split-season between Tampa Bay and Montreal, Canada. pic.twitter.com/tTH4YR8JrC 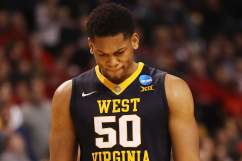