Getty Steph and Ayesha Curry both have Canadian roots.

Steph Curry’s wife, Ayesha Curry, has witnessed quite a few NBA finals series, but 2019 has added significance as the Warriors take on the Raptors who represent her hometown. Ayesha grew up in Toronto before moving to Charlotte, North Carolina at the age of 14, per TSN. Steph admits that his wife’s Canadian accent comes out from time to time.

“She’s got a strong Canadian accent that comes back like that,” Steph explained to TSN. “I’m always amazed when that happens.”

Ayesha grew up in the Markham neighborhood of Toronto, and the couple first bonded over Canadian candy. After finding out Steph liked a candy called Maynards, she gifted him a bag of the peach flavored edition when the two were in high school. The couple met at the youth group of a Charlotte church.

“I got him some fuzzy peaches, but I was so shy I didn’t say anything,” Ayesha told the Charlotte Observer. “I just handed them to him and walked off.”

So… A Scarborough ting and a Markham ting walk into a room… what happens next?! ?

Ayesha has been outspoken about immigration reform and describes herself as a “passionate dual citizen” in her Instagram bio. During a 2018 ABC News interview, Ayesha discussed why she is passionate about this and other issues.

“My family values are really, really important. … I feel really strongly about immigration because my mom is … from Jamaica,” Ayesha noted to ABC News. “She still has a green card here. I just think about all the families that could be affected by these, you know, ill decisions that are being made and it breaks my heart.”

Ayesha comes from a diverse background with parents that have Jamaican, Chinese, Polish and African-American roots. She spoke with Parents.com about how cooking would bring her family together.

“My whole family [prompted love of food]. My mom is Jamaican and Chinese, and my dad is Polish and African-American, so I’m very mixed [culturally],” Ayesha told Parents.com. “The kitchen was the center of our household. I spent all of my time there growing up.”

One of my favorite looks and pictures from the @parents shoot!!! Thank you @daymion_ for capturing our family in all of our chaotic glory. I love it. ???

Steph spent 18 months in Toronto during middle school as his father, Dell Curry, played for the Raptors, per the San Francisco Chronicle. Raptors public-address announcer Herbie Kuhn noted that Toronto is still proud of Steph even though he wears a Warriors jersey.

“Everybody knows he spent time here, and everybody knows he married a Canadian,” Herbie explained to the San Francisco Chronicle. “You won’t hear us boast about it because we’re not really that type of people, but there’s definitely an underlying pride that he spent some of those formative years in the greater Toronto area.”

Steph still has fond memories of his time in Canada. That said, Raptors fans should not expect the All-Star to go easy on their beloved team as they square off for an NBA title.

“The people [in Toronto] were amazing,” Steph explained to the San Francisco Chronicle. “It’s so diverse. It has good energy and, of course, amazing candy.” 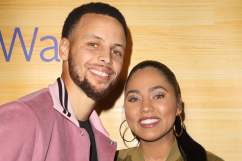