“Last Chance U” coach Jason Brown’s year has not been the best as the former football coach has been charged with eight felony counts after he was accused of stealing the identity of a lawyer, the Parsons Sun reports. Brown is facing four counts of blackmail, four counts of identity theft and two misdemeanor counts of criminal false communication.

Brown allegedly impersonated an attorney for the law office of famed lawyer Johnnie Cochran in emails sent to the Montgomery County Chronicle and Independence Daily Reporter. The emails were sent after their coverage of a fight between the Independence and Garden City football teams last season. The Parsons Sun detailed the allegations.

In October 2018, Brown allegedly sent a cease-and-desist email to the Chronicle shortly after the paper published an editorial regarding a fight between the Independence and Garden City football teams. Brown allegedly posed as an attorney in the Cochran Law Firm in California, which was founded by Johnnie Cochran.

In February, the Chronicle received another set of communications purportedly from the attorney regarding the paper’s investigation into Brown’s treatment of a German football player.

Hate him or love him, Jason Brown returns to Last Chance U: INDY Part 2 on July 19. Let's go. pic.twitter.com/NMqVIoaWDr

Brown’s hearing is set for August 22 at which point the Montgomery County judge will determine if there is enough evidence to warrant a trial. When contacted by Football Scoop prior to the charges, Brown noted that he was surprised and unaware of the eventual charges.

“I’m surprised as you are, this is crazy,” Brown told Football Scoop. “I’m trying to find out what’s going on myself. I’ve not been contacted by anyone.”

Former Independence assistant coach Jake Bugg is listed as the victim for the two misdemeanor counts of false communication. The Montgomery Chronicle turned over suspicious emails to authorities, and they were traced back to IP addresses connected to Brown’s devices, per the Parsons Sun.

The Chronicle questioned the authenticity of those emails in February. The weekly newspaper turned the emails over the Montgomery County Sheriff’s Department for investigation.

The charges against Brown, according to the Chronicle, allege that he initiated email communication with the newspapers by impersonating the attorney through a Yahoo! email address that had a similar domain name to the law firm’s. The emails in question were traced to IP addresses on devices belonging to Brown, the Chronicle reported.

Officially dropped my book “Hate Me Now Love Me Later”, please go visit either link to purchase! Thanks for the love and support!
https://t.co/QOFG2gHnAL https://t.co/KpSyeK8Uiy pic.twitter.com/CNglneTRlu

According to ESPN, Brown resigned as Independence head coach after allegedly telling a German player, “I am your new Hitler.” Brown released a statement in February noting the Montgomery Chronicle “greatly diminished my ability to successfully do my job.”

“More plainly, the Montgomery County Chronicle has greatly diminished my ability to successfully do my job, and has set this football program back significantly, and the cumulative effect of all these detrimental factors I believe clearly constitute a constructive discharge of my employment,” Brown said in part of the statement, per Football Scoop.

Brown has remained active on Twitter since the most recent allegations. The “Last Chance U” coach released a new book called Hate Me Now Love Me Later which he has been promoting. If convicted, Brown faces significant jail time as the Parsons Sun detailed.

The last episode of “Last Chance U” details Brown’s resignation along with both sides of the text message incidents. Brown appeared to be back in California during his final interview on “Last Chance U.” 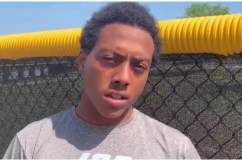