Getty Megan Rapinoe is expected to play against the Netherlands in the World Cup final.

U.S. Soccer representatives declined to comment on if the decision was tied to an injury, noting that Ellis would respond to questions after the game, Fox previously reported. Goal’s Seth Vertelney reported that Rapinoe has been ruled out for the entire England match.

“Megan Rapinoe is OUT of the USWNT lineup vs. England. #FIFAWWC Asked U.S. official if she’s healthy: ‘Jill will deal with that after the game,'” Vertelney tweeted.

Leading up to the match, there was not any word about Rapinoe suffering an injury, so the move could be strategic or disciplinary. It seems unlikely to be pure strategic if Rapinoe was ruled out for the entire game. SB Nation’s Kim McCauley suggested the decision could help the USWNT’s defensive efforts against England.

So You’re Wondering Why Megan Rapinoe Isn’t Starting For The USWNT:

As good as Pinoe is, she doesn’t contribute a lot defensively. Christen Press is the fastest and fittest player on the USWNT. England RB Lucy Bronze has been the best player at this tournament. So, that’s why…

In the event that England abandons their usual high-tempo style and the USWNT needs to break down a structured defense late, they can bring Pinoe off the bench.

For once, I’m defending a controversial Jill Ellis decision. I think it’s a good one.

The Wall Street Journal’s Rachel Bachman reported that U.S. Soccer noted it was not a disciplinary action.

“When asked whether the decision not to start Megan Rapinoe was related to injury or whether it was a disciplinary decision, a U.S. Soccer spokesman said only that the decision was “not disciplinary,” Bachman tweeted.

What Happened to Megan Rapinoe? The USWNT’S Star’s Absence Remains a Mystery

There is also the chance Ellis was attempting to rest Rapinoe, but this also seems unlikely given the USWNT are playing in the World Cup semifinal match with so much on the line. Soccer writer Dan Lauletta reported Rapinoe was not warming up with the team.

“Megan Rapinoe standing on the edge of the 18, no shin guards and not warming up ahead of the start of #ENGUSA World Cup semifinal in about 40 minutes,” Lauletta tweeted.

All this should lead to an interesting postgame press conference with the U.S. manager. It has been Rapinoe’s streak of goals that helped the USA advance in the knockout stage.

Prior to the match, England manager Phil Neville was complimentary of Rapinoe. Neville even joked that Rapinoe broke his Apple watch during their last matchup as Yahoo Sports detailed.

There was a ball that bounced on the touchline — I went to catch the ball and her studs came right though my Apple watch, and she’s never paid me back for that yet,” Neville joked. “And what I liked about it, she didn’t say sorry, she just got on with it. She’s a winner. I like the individuality, both on and off the field, and I absolutely think she’s a world-class footballer. 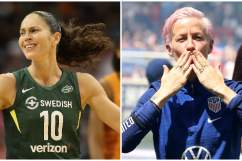