Getty The USMNT have a much higher earning potential than the USWNT.

The U.S. soccer team salaries vary across the USWNT and USMNT. Goalkeeper Ashlyn Harris told The New York Times that she expected to earn between $300,000 to $400,000 in 2019. An anonymous player noted their annual earnings were much less at $167,500. LUNA Bar donated $718,750 to the USWNT which made up the $31,250 per player difference between the men’s and women’s roster bonuses for making the World Cup.

The big discrepancy is between the NWSL and MLS salaries. The minimum salary in the NWSL is $16,538, while the maximum salary is $46,200, per Oregon Live. Orlando Weekly reported in 2016 that USWNT members can have a higher max salary of $56,000, a number that has likely gone up.

The MLS has a reserve minimum salary of $56,250 and a senior minimum salary of $70,250, per MLS Soccer. Salaries for the top USMNT players are much higher as Michael Bradley makes a $6 million base salary for Toronto FC. For the select few that are good enough to play in the top international leagues, the money is even more lucrative.

Chelsea paid nearly $73 million to sign Christian Pulisic making it the most expensive deal for an American soccer player ever, per NPR. While Chelsea has not disclosed his actual salary, the average EPL players makes $3.3 million, per CNBC.

The NWSL is admittedly not as far along in its development as the MLS who benefits from stronger television contracts and attendance among other financial factors. The bigger question is at the national team level when there are years, including 2017 and 2018, where the USWNT brings in more revenue than the USMNT, per Yahoo Sports.

Alex Morgan is likely the USWNT player with the highest earning potential. Morgan is estimated to earn $1 million annually, per Money.com. The majority of Morgan’s earnings likely comes from endorsements off the soccer field.

From car commercials to movies, Morgan is one of the most recognizable women’s soccer players in the world. Morgan is also one of 28 players who are part of a lawsuit filed against the U.S. Soccer Federation for equal pay. Morgan explained to Time that the responsibilities for a women’s soccer player exceed their male counterparts.

“We have to do more in general–we have to be the athlete, we have to be the role model, we have to lead the way for the next generation,” Morgan explained to Time. “Are male athletes doing that? Are they thinking about anyone other than themselves? I don’t know. We do have more than one job within this role, and are getting paid much less.”

During World Cup Years, the Max Earnings for the USMNT Is Estimated at $1.1 Million While It Is $200,000 for the USWNT

The Guardian conducted a study on the pay discrepancies between the men’s and women’s U.S. teams. With a World Cup win, the max earnings for a USWNT player is $200,000, while a USMNT player could earn $1.1 million with a title. The USWNT would also get a four-game victory tour which means players would earn an additional $60,869, per The Guardian.

The massive difference in World Cup pay is somewhat tied to the disparity in FIFA purses. France earned $38 million for winning the 2018 World Cup, while the USA received $4 million for their 2019 win. This number is double the $2 million the USWNT earned after their 2015 World Cup title. 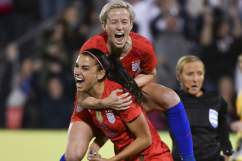 Hey America, This Is What the USWNT Is Teaching Our Kids at the World Cup