Getty The USWNT is fighting for equal pay.

The U.S. women’s soccer team salary depends on how well the squad does in the World Cup. Each USWNT player’s salary also depends on whether they play in the NWSL. There appears to be a wide salary range in the amount of money earned across the USWNT.

USWNT members claimed in a recent lawsuit that their maximum salary in a typical year is $99,000 ($4,950 per game) if the team played and won 20 exhibition matchups, per Goal.com. Given the same circumstances, the men’s team would earn $263,320 ($13,166 per game) the lawsuit states. Both estimates appear to be based on a typical year when the World Cup is not being played.

NWSL players earn additional money ranging from $16,538 for the minimum salary to a $46,200 maximum salary. Orlando Weekly reported in 2016 that USWNT members are eligible for a higher max salary of $56,000.

Thank you @lunabar for taking a stand by closing the roster bonus gap and supporting our fight for equal pay. #SomedayIsNow #ad

The winner of the 2019 World Cup will earn $4 million for the title, per Money.com. If this was split equally among the 23 players on the team, each person would take home $173,913 if the USWNT won their second straight World Cup.

U.S. Soccer and the players involved in the lawsuit have agreed to pursue mediation after the World Cup, per The Athletic. Sports lawyer Lauren McCoy believes the team’s success on the field gives the players a bit of leverage in negotiations.

“The USWNT’s current success in the Women’s World Cup likely played a role in the agreement to pursue mediation,” McCoy noted to The Athletic. “Not only are the women dominant on the field and seeing record attendance and viewership, everything is skewing the media and fans to discuss the perspective that the USWNT is different than the USMNT in a positive way.”

Off the field, I try not to sweat the small stuff, and on the field, I’m fully protected thanks to @secretdeodorant Outlast. This deodorant provides 48-hour odor protection that never stops and is my go-to when I’m on the road. Nothing fights sweat better for me! #AllStrengthNoSweat #OutlastAnything #Ad

Alex Morgan is the face of the USWNT and likely has the highest earnings potential on the team. According to Money.com, Morgan is estimated to earn $1 million annually. The majority of Morgan’s money likely comes from her business ventures and sponsorship opportunities outside of soccer. Morgan’s endorsements include Coke, Nike and Secret deodorant. Morgan is one of 28 soccer players that is part of the lawsuit filed against U.S. Soccer for “intentional gender discimination,” per ESPN.

“We have to do more in general–we have to be the athlete, we have to be the role model, we have to lead the way for the next generation,” Morgan explained to Time. “Are male athletes doing that? Are they thinking about anyone other than themselves? I don’t know. We do have more than one job within this role, and are getting paid much less.” 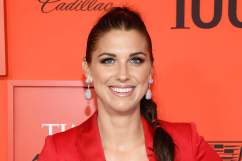 Alex Morgan’s Salary: How Much Money Does She Make in Her Contract?