Getty Antonio Brown issued a statement that he is ready to play football again.

After a weekend full of retirement rumors, Antonio Brown issued a statement that dismissed the notion that he would walk away from football over his desire to wear his old helmet. After the NFL ruled that Brown will be required to wear the new helmet, the wide receiver noted on Twitter that he is “looking forward to rejoining my teammates on the field.”

“While I disagree with the arbitrator’s decision, I’m working on getting back to full health and looking forward to rejoining my teammates on the field. I’m excited about this season appreciate all the concerns about my feet ?!” #AlwaysAFight #Represent #itsbiggerthanme,” Brown tweeted.

USA Today’s Mike Jones reported that the NFL ruled against Brown wearing his old helmet and the wide receiver will be required to comply with the new rules.

“According to two sources, the arbitrator has ruled against Antonio Brown in his grievance to wear the old helmet,” Jones tweeted.

NFL Network’s Mike Silver reported that Brown’s fight against the new helmets has been a point of contention since he arrived in Oakland. While Brown has had a short stay with the Raiders, it has been far from uneventful.

Silver also reported that Brown went so far as to have his old Steelers helmet painted to replicate the Raiders color scheme. Once the Raiders found out he was wearing the old helmet, the team once again informed him that he was required to comply with the NFL rules by wearing the new helmet.

“His continued frustration surrounding the situation has created a buzz among teammates and coaches, one of whom referred to the saga as ‘honestly the most insane thing I have ever heard. I don’t know why it’s so important to him. It doesn’t make any sense.’…However, sometime in the next couple of weeks, Brown once again tried to take the field with his old helmet, which he had since had repainted with colors approximating—but not completely mimicking—the Raiders’ silver-and-black design,” Silver tweeted as part of a lengthy Twitter thread regarding Brown.

It is hard to imagine Raiders head coach Jon Gruden not being frustrated by the start of Brown’s tenure with the Raiders. From the hot air balloon to frostbitten feet, the talk so far around Raiders camp has been about anything but football. Gruden offered his support for Brown publicly prior to the latest ruling.

“We’re gonna support him,” Gruden said, per NFL.com. “And whatever his decision is, we’ll stand by it. But we’re confident he’s going to be a huge factor for the Raiders for years to come…I have a lot of confidence that he’s one of the premier competitors I’ve ever been around. And I got a feeling he would play with no helmet, that’s how much he loves to play,” Gruden said. “But I’m not gonna put words in anybody’s mouth.” 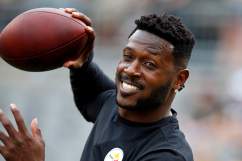