Getty CJ Henderson #5 of the Florida Gators celebrates his first quarter sack on Shea Patterson #2 of the Michigan Wolverines during the Chick-fil-A Peach Bowl at Mercedes-Benz Stadium on December 29, 2018 in Atlanta, Georgia.

CJ Henderson is probably Florida’s top NFL Draft prospect this season. The junior out of Miami has prototypical size at 6-foot-1, 202 pounds and could be the next great pro corner for the Gators like Vernon Hargreaves or Jalen Tabor.

Last year, he racked up 38 tackles, five TFLs and three sacks. He only picked off two passes, but he was instrumental in shutting down Michigan’s strong receivers in the Peach Bowl last season. The Wolverines were only able to generate 236 yards through the air.

He earned All-SEC honors after the season and is poised for first-team consideration this season, if not All-American looks. In 2017, he tallied four picks, returning two for touchdowns.

Pro scouts are picking up on his production, size and athleticism. Here is what Henderson is looking at in terms of draft projections for April 2020. 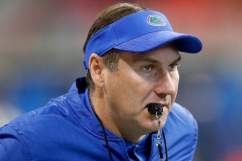 Dan Mullen Salary: How Much Does Florida Gators Coach Make?

247 Sports projects Henderson into the top-10, calling him the ninth-best prospect for the draft. They point to his 4.35-second 40 from high school, as well as his 37-inch vertical as attractive measurables at the next level.

He finished with a 72.1 PFF College Grade as a true freshman starter and jumped to an 83.5 last season. Henderson isn’t great against the run. But he led the SEC in receptions allowed per snap, per PFF. 3. His upside is unreal given his combination of length, athletic ability and his relative inexperience at the position.

Per SB Nation, Henderson is more of a first-round lock than a top-10 certainty.

According to some reports, Henderson didn’t allow a single touchdown reception last season. Like a lot of college cornerbacks, he’s not much against the run, but playing the pass he’s among the best in the country. Regardless, if Henderson stays healthy this season, a spot in the top 32 will be his.

Lastly, Walter Football has him going late in the first or early in the second, citing his “excellent size to go along with speed and cover skills.” He’s the No. 2 cornerback in their rankings.

Against Michigan, his strengths were on full display, as well as his weakness against the run. On Michigan’s first drive, he failed to show full effort in pursuit on a near-touchdown run by Christian Turner.

His blitzing acumen off the edge showed up in the first quarter, though. He slipped inside first-team All-Big Ten left tackle Jon Runyan, Jr. to hit Shea Patterson.

Later on, he worked against Nico Collins, whose a big body at 6-foot-5 who has the best catch rate in the country per Pro Football Focus. While Henderson was boxed out a few times, he battled and held Collins to well under 100 yards on the afternoon.

Most of the damage done through the air came away from Henderson, as Collins and Donovan Peoples-Jones took advantage in jump-ball situations.

Lastly, he lined up as a quasi-safety at times against Michigan, showing an ability to drop back in zone coverage. That type of versatility will be valuable at the next level.

With a good 2019, he may reach those top-10 projections. However, he should go in the first round at the very least. 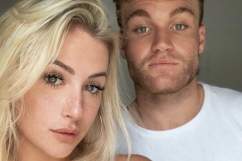