Getty Justin Herbert is one of the top college football quarterbacks in the country.

After a few appetizers, the college football season officially kicks off this weekend, but there are no NFL games until Week 1 starts on Thursday, September 5th. There are plenty of college football games on TV stretching all the way through Labor Day. The NFL preseason is over as teams shift from finalizing their roster to getting ready for the regular season.

No. 11 Oregon squares off with No. 16 Auburn in Dallas in the marquee matchup of the weekend. The Ducks are led by top NFL prospect Justin Herbert, while freshman quarterback Bo Nix makes his debut for the Tigers.

One of the other intriguing matchups is Boise State taking on Florida State. The game was originally scheduled to be a neutral site game in Jacksonville but has now been moved to Doak Campbell Stadium in Tallahassee because of Hurricane Dorian. The game has also been moved from primetime to 12 p.m. Eastern on ESPN News.

There is one marquee game on Sunday, September 1st with Houston beginning the Dana Holgorsen era against Oklahoma at 7:30 p.m. Eastern on ABC. Alabama transfer Jalen Hurts will be making his debut for the Sooners.

Here is a look at the college football TV schedule for the weekend. 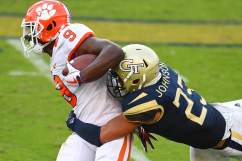 ACC Network: What TV Channel Is It On?

Read More
College Football, Football, TV
What college football games are on TV today? Are there any NFL preseason games this weekend? Find out the full football TV schedule for Labor Day weekend.