Getty Clemson and Georgia Tech is on ACC Network.

The ACC Network is a new TV channel dedicated to the Atlantic Coast Conference and is celebrating the launch by broadcasting the Clemson-Georgia Tech game. While the launch of the new channel is exciting for ACC fans, it can initially be a bit confusing trying to figure out where to watch the game. 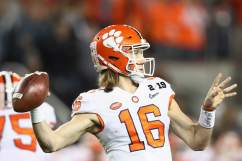 Georgia Tech vs Clemson Live Stream: How to Watch Online

Unfortunately, Comcast, Dish Network and AT&T U-Verse are among the providers not currently offering ACC Network. For subscribers that do not have ACC Network through your provider, the best option may be to start a trial of YouTube TV or Playstation Vue if you are wanting to watch a game on TV.

DirecTV made ACC Network channel No. 612 which groups it with the other conference TV channels like the Big Ten and SEC Network. As with the other channels, the ACC Network requires DirecTV subscribers to upgrade to the sports package to be able to watch ACCN. Spectrum cable subscribers will have to check your local listings to find the channel in your area. The Athletic reported that some Spectrum subscribers have had some complications in getting ACC Network.

On Aug. 22, however, the distinction mattered. Spectrum customers with the right channel package automatically received the ACC Network. The so-called legacy customers had a different reality; those who wanted the ACC Network either had to leave the company entirely or convert to a specific Spectrum channel package. Some “converts” saw their prices go up (this led to some indigestion and controversy), while others saw their monthly bill go down.

What Is the ACC Network?

The ACC Network will be the conference’s TV channel similar to the SEC or Big Ten Network. The programming is specific to the ACC including games for a wide array of collegiate sports.

The network launched on August 22, 2019 and debuted a few unique program offerings. The four-part docu-series “All In” gives fans an inside look at Clemson football. ACC Network also aired a documentary entitled “The Class That Saved Coach K” which detailed Duke’s 1982 basketball recruiting class.

There are also nightly shows dedicated to a roundup of ACC news. The ACC is just the latest conference to launch its own network. Conferences (and teams in the case of the Universtiy of Texas) are finding that TV networks can be a lucrative way to generate more revenue for schools while also serving as an informal advertisement for the conference.

The Clemson documentary had more of a controlled feel than something like “Hard Knocks” which offers true behind-the-scenes access, but the shows still had plenty of entertainment value. The ACC offers an FAQ covering specific providers, programming overview and additional data about the launch.

Here is a rundown of some of the most popular cable, satellite and streaming providers that carry ACC Network.

Georgia Tech vs Clemson Live Stream: How to Watch Online