Getty The Cowboys take on the 49ers in preseason action.

Three NFL preseason games conclude the Week 1 schedule and the first full week of football after a long hiatus. The Cowboys and 49ers headline tonight’s group of games. It is the lone game on national TV as Dallas and San Francisco square off at 9 p.m. Eastern on NFL Network.

The Rams-Raiders and Bengals-Chiefs are the other games on today’s NFL slate. Both games kickoff at 8 p.m. Eastern but are only broadcast locally. Click here to see what game are televised in your area. These are the only three games of the weekend as there are no games on Sunday, August 10th.

Fans can subscribe to NFL Game Pass for $99 which allows you to watch all out-of-market games live. During the season, you will also have access to condensed replays of every game. You can sign up for a free seven-day trial of NFL Game Pass to test out the product.

The Cowboys are well into training camp, but all the talk is about what is happening off the football field. Dak Prescott, Amari Cooper and Ezekiel Elliott are all up for new contracts. Elliott is the only one of the trio holding out as both sides continue to publicly dig in their heels during negotiations.

“Multiple sources tell @dmn_cowboys the Cowboys have not been informed that Zeke Elliott will sit out the season if he doesnt get a new contract,” Watkins tweeted.

“I expect him to definitely play two and three, but nothing is mapped out and set in stone,” Shanahan explained to The Mercury News.

There have been positive reports coming out of 49ers training camp. During the offseason, Garoppolo noted that he felt good heading into 2019.

“I really do [feel good],” Garoppolo noted to Pro Football Talk. “The rehab process has gone really well. Knock on wood. We haven’t had any setbacks. OTAs went about as well as I could have hoped for and now for training camp hopefully we’ll be full go with team drills and all that stuff. We’re moving in the right direction. We’ve just got to keep going day by day and keep stacking them together. It’s a long process, but we’ve come this far, so why stop now, right?”

Here’s a look at the NFL preseason schedule for Saturday, August 10th. 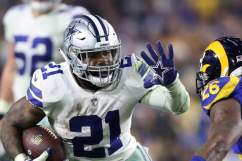 Ezekiel Elliott Will Not Play for Cowboys Without a New Contract

Read More
Football, NFL
What NFL preseason football games are on TV today? Check out this weekend's NFL preseason schedule and find out when the Cowboys-49ers among others play today.