Instagram Nik Scalzo is attending the University of Kentucky.

Please be advised there are some small spoilers ahead if you have not watched “QB1: Beyond the Lights.”

Nik Scalzo is one of the stars of “QB1: Beyond the Lights” and is now playing college football in the SEC. Scalzo was a three-star recruit and the No. 28th ranked dual-threat quarterback, per 247 Sports. Scalzo threw for 6,471 yards and 74 touchdowns over his three seasons at Cardinal Gibbons. He also rushed for 613 yards and four touchdowns, per Kentucky Athletics.

Scalzo received offers from a number of schools including Buffalo, Central Michigan, Illinois, Yale and UNLV. The quarterback committed to Kentucky where he is not expected to see a lot of playing time his freshman season. Terry Wilson returns as the Wildcats starter as Scalzo looks to climb the depth chart. Scalzo discussed his decision to join the Wildcats and compete in the SEC.

“They believed in me 100 percent, and they overlook my size and just see that I’m a playmaker,” Scalzo explained to the Sun-Sentinel. “It was always my dream to play Power-Five conference college football, and my dreams are coming true.”

Scalzo will see a bump up in competition, but he believes that playing high school football in Florida will help ease the learning curve. The quarterback spoke with Rivals about the transition to playing in college.

“Where I’m from, Fort Lauderdale, we honestly have a lot of fast corners like that,” Scalzo noted to Rivals. “They’re playing in the SEC now. It’s kind of good now. It’s good that I was groomed in high school, playing against those types of kids. Coming here, it makes it a little easier on my part…I’m going to do whatever I have to do to help this team win. That’s what I want to do. I want to win. I just want to be the best player I can be, whether I’m playing or not. If I’m on the sideline, I’m going to be the most supportive guy. If I’m playing, I’m going to be the best player I can be. Just be the best person I can be.”

Scalzo Tore His ACL in a High School Playoff Game

Scalzo’s high school career ended on a down note after the quarterback tore his ACL during the playoffs. The new Kentucky quarterback is confident that his rehab has allowed him to return to form.

“It’s like the injury never happened,” Scalzo told Vaughts’ Views. “I am doing stuff I am not supposed to be doing yet. I am good to go…My upper body is a lot stronger. I am throwing the ball with more velocity.”

Given Kentucky’s depth at quarterback, Scalzo may not see the field this season. It will be interesting to see if the Wildcats will consider redshirting the freshman quarterback. 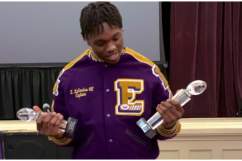