Bianca Andreescu’s parents are Nicu and Maria Andreescu. Andreescu’s mother, Maria Andreescu, has become a bit of a viral phenomenon throughout her daughter’s bid for the U.S. Open Final, known for her massive sunglasses and glitzy outfits. Andreescu’s father, Nicu, has also been present at every match.

Andreescu is squaring off against Serena Williams in the U.S. Open Final today. In addition to Andreescu’s parents, you might also see their little poodle Coco, who has become a mini celebrity in her own right in the past week.

1. Maria Andreescu is a Chief Compliance Officer for an Investment Firm

According to Town and Country Magazine, Maria Andreescu is a chief compliance officer for a Toronto-based investment firm. She graduated from the University of Craiova with an MBA in financial management; she is originally from Romania.

Both of Andreescu’s parents are huge fans of their daughter’s tennis career. Nicu said to The New York Times that he and his wife have watched their daughter compete even while dealing with spotty wifi during plane flights.

“When we got on the plane we asked the flight attendant if they had internet,” he said to The Times. “I told her I wanted to watch my daughter play tennis. My wife and I were in the back cheering the whole time, and when we landed, the flight attendant asked me how she did. I was happy to say, she won.”

Happy Father’s Day daddioo. You’re a true father figure. I also have no idea how you put up with me lol (his face says it all). Te iubesc ?

Nicu Andreescu is an engineer at Matcor Automotive Inc, according to Town and Country. He graduated from Technical University of Brasow with a B.S. in mechanical engineering. Though he hasn’t received quite the level of internet focus that his wife Maria has, he has been present at every game Andreescu has moved through so far in the U.S. Open.

Bianca has paid tribute to her father on more than one occasion on social media. In June 2018, she wrote, “Happy Father’s Day daddioo. You’re a true father figure. I also have no idea how you put up with me lol (his face says it all). Te iubesc ?”

The Andreescus told The New York Times that they had booked a hotel room in New York for the whole two weeks prior to the beginning of the U.S. Open, just in case their daughter made it to the final.

3. The Andreescus Are From Romania & Lived in Canada When Bianca Was Born 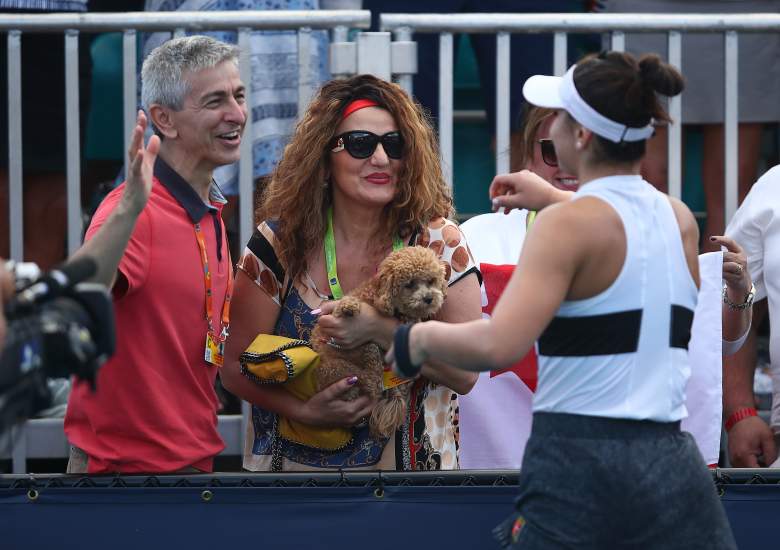 According to The New York Times, the Andreescus live in Toronto, though they first met while they were studying in Romania. They first moved to Toronto together in 1994. Bianca was born in Toronto in 2000.

To the Globe and Mail, a Canadian publication, Nicu said of their move to Canada, “We arrived in Canada with two suitcases and that’s all. We had a great first impression when we arrived, having come from a former communist country. We wanted to go to Canada and start a new life and have a better future for any kids we might have.”

Maria and Bianca moved to Romania for three years from 2006-2009 so that Maria could run a trucking business, according to Town and Country. Other publications report that all three family members moved home to Romania for those years.

It was during her time in Romania that young Bianca began to show a gift with the sport of Tennis, according to Forbes. When she and her parents returned to Canada a few years later, she started training competitively at Team Canada’s Under-14 National Training Center in Toronto.

4. Bianca Has Called Her Mother Maria the ‘Coolest Person’ She Knows

In a post game interview, Andreescu called her mother the “coolest person” she knows. She frequently gives shout outs to her mother on her social media channels, too.

In an Instagram post, Andreescu wrote of her mother, “Without you, I don’t know what I’d do. But with you, I know there is nothing I can’t do. Happy birthday mom I love you sooo much?”

Maria has also had a bit of a hand in her daughter’s illustrious tennis career, in addition to being her caregiver. According to Forbes, Maria taught her daughter meditation and visualization techniques when she was young, and Bianca still uses various meditation exercises like yoga to help her stay in the moment when she’s competing.

5. Maria Andreescu’s Dog Has Gone Viral During its Visits to the U.S. Open

Maria Andreescu may be attending every game, but so is her little poodle. The dog has gotten nearly as much attention as Maria has during her daughter’s U.S. Open matches.

Technically, Coco has to remain on the floor in order to be in compliance with the rules at the U.S. Open. Nicu Andreescu said to The New York Times, “We had to keep our hands on her the whole time because she likes to jump up and watch.”

In spite of the rules, Coco has been seen on Maria’s lap on more than one occasion during Bianca’s matches — and most of Andreescu’s fans don’t seem to mind.

One person tweeted, “Coco Andreescu better get her own little trophy if Bianca pulls this off”