Tevin Coleman is expected to miss games with an ankle injury opening up fantasy opportunities in the Niners backfield for Matt Breida and Raheem Mostert. NFL Network’s Ian Rapoport detailed Coleman’s injury noting the running back will likely “miss time.”

“49ers RB Tevin Coleman suffered an ankle sprain in yesterday’s win over the #Bucs, source said, an injury that is expected to force him to miss time. He’s having tests today (in Youngstown, OH, where the team is staying) to determine the nature of the sprain,” Rapoport tweeted.

Breida is the Niners running back to own in fantasy for now, but you should also keep your eye on Mostert. Breida should be the first pickup in all leagues if for some reason he is on your waiver wire. For deeper leagues, Breida is likely already owned making Mostert a good stash candidate for this week’s waiver wire.

Raheem Mostert Is Worth a Waiver Wire Stash in Deeper Leagues

Mostert was the more efficient back in Week 1 averaging 4.4 yards per carry, well above the 2.5 yards that Breida had per rush. Mostert had nine carries for 40 yards in Week 1. The former Purdue running back also looked good in limited action in 2018. Mostert finished the 2018 season with 34 carries for 261 yards and a touchdown while averaging 7.7 yards per rush.

Breida did exit the Niners matchup with the Bucs with “hydration issues” but later returned to the game, per Rotoworld. Multiple running backs have fantasy value in Kyle Shanahan’s offense meaning Breida and Mostert could both have value if Coleman misses significant time.

Once Coleman returns, Breida is likely to retain his fantasy value as he was listed as the starter heading into Week 1. Mostert’s fantasy outlook is directly related to Coleman being sidelined. USA Today’s Kyle Madson makes the argument that Mostert’s production could warrant the running back more carries.

More work for Mostert seemed like a logical move for the 49ers that’s already working with a running-back-by-committee. He showed Sunday how valuable he can be. He led the team in rushing yards with 40 on nine carries…

He’s an explosive runner who repeatedly creates yards, runs through contact, and rarely finishes plays on his back. He helped the 49ers close the win over the Bucs with a couple of terrific fourth-quarter runs, including one where he delivered a nasty stiff arm and then lowered his shoulder through a defensive back to finish the play.

One other Niners running back to watch is Jeff Wilson who is likely to be activated from the practice squad. While I would avoid adding Wilson to your roster, he could eventually get an opportunity for the 49ers if Breida or Mostert are not able to separate themselves with their production. 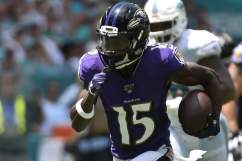