Melvin Gordon’s holdout could be coming to an end much to the delight of fantasy owners and Chargers fans. ESPN’s Adam Schefter reported that Gordon “could soon be moving up his reporting date.”

“Chargers’ RB Melvin Gordon’s holdout could soon be coming to an end, though no final decisions have made when to report, per league sources. He had planned to return at some point in October, but could soon be moving up his reporting date,” Schefter tweeted.

Austin Ekeler has filled in admirably in Gordon’s absence, but the Chargers are just 1-2 making a potential Gordon return good news for the team. This is assuming Gordon is in top shape to be the workhorse back we are used to seeing. Cleveland Plain Dealer’s Branson Wright reported that Gordon is expected to report to the Chargers on Thursday.

“#Chargers holdout #MelvinGordon will report to the team on Thursday, told today to the #ClevelandPlainDealer by a source close to the situation.
Gordon has been a contract holdout since the start of training camp. Gordon will become an unrestricted free agent in 2020,” Wright tweeted.

NFL Network’s Ian Rapoport reported that a specific date has not been set, but indicated it could be sooner rather than later.

“While no date has been set, this is something that’s being considered for RB Melvin Gordon, source confirmed. A potential early end to his holdout,” Rapoport noted on Twitter.

Gordon Can Be Considered an RB1 in Fantasy Once He Returns

As soon as Gordon is active, the Chargers running back immediately becomes an RB1 with a lot of upside. In the past, we have seen players sustain injuries after lengthy holdouts, so there is a bit of concern for Gordon’s long-term health. Gordon is owned in most fantasy leagues but should be picked up if he is somehow available.

If you have Gordon on your roster, you could look to trade the Chargers running back if you are concerned about his potential production after his holdout. Chances are the return you can get for him does not match his potential fantasy value, and you are likely better suited to keep Gordon on your team.

Gordon’s Holdout Could End as Soon as Week 4

Schefter indicated that Gordon’s holdout could end before October. Given we are at the end of the month, this means Gordon could report as soon as this week.

If the Cleveland Plain Dealer report is accurate, Gordon could be suiting up as soon as Week 4. Gordon would have a plus matchup against a Dolphins team that is giving up a lot of fantasy points to opposing players. As long as Gordon is active, he becomes a weekly must-start in fantasy.

Rapoport previously reported that Gordon was targetting the Week 6 to Week 8 range to end his holdout. All indications are we are going to be seeing Gordon back on the football field in the near future.

Gordon played in 12 games in 2018 notching 885 rushing yards and 10 touchdowns. The Chargers running back also had 50 receptions for 490 yards and four touchdowns.

If you have questions about Gordon’s value or general fantasy football questions, feel free to reach out on Twitter @JonDAdams. 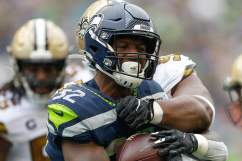