Getty Texans receiver Keke Coutee will be one of the top fantasy football waiver wire pickups heading into Week 6.

The fantasy football waiver wire represents no easy decisions with just a few players being left up for grabs in most leagues. There are only a handful of players that have slipped through the cracks and are worth a pickup as you look towards making a run at the fantasy playoffs.

With Wayne Gallman sustaining a concussion, Jon Hilliman is worth a speculative add, but the backup Giants running back has limited long-term fantasy value. Saquon Barkley appears to be nearing a comeback but there is no guarantee he will be able to be active on a short week. That said, Hilliman is a less than ideal start against the Patriots defense even if Barkley does not play on Thursday.

Keke Coutee and Will Fuller both had good outings for the Texans in the absence of Kenny Stills. There is a good chance Fuller is already owned in your league, but Coutee has been a fantasy sleeper for the last year. Coutee may finally have his breakout year now that he is healthy, and there appears to be a window of opportunity in the Texans offense. The Texans receiver is optimistic about his chance.

“I’m getting back to my normal self, for sure,” Coutee told the Texans website. “Knowing how my body works, and knowing what I need to do to get my body going. I’m pretty fresh right now. Ready to go.”

Dede Westbrook is owned in about 60 percent of ESPN leagues, but if he is somehow available in your league you should snag him. Westbrook has been Gardner Minshew’s second option behind D.J. Chark in a surprisingly good Jaguars offense.

As the Bengals continue to lose receivers, Auden Tate has stepped up with the increased opportunity. John Ross joins A.J. Green as another Cincinnati receiver sidelined with an injury. Green is expected to miss more time making Tate the Bengals’ WR2 behind Tyler Boyd.

Here is a look at my waiver wire rankings heading into Week 6. We will continue to add to this list as more games are completed. 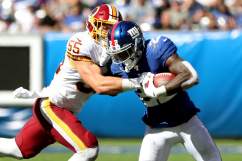