Kyler Murray is the rare athlete that was a first-round draft pick in both the NFL and MLB. The odds are stacked against you to even make it into either the NFL or MLB in any capacity. Murray’s first-round status in both sports shows his rare athleticism and points to him being among the best-of-the-best in both baseball and football.

The A’s were under the impression that Murray would still report to spring training, but the quarterback made his NFL intentions known just months before the draft. Oakland did their best to try to convince Murray to play baseball but was unsuccessful in their recruitment. Nationals pitcher Tony Sipp believes Murray could still play both baseball and football if he wanted.

“He can definitely do both; it’s definitely not over with,” Sipp explained to The Undefeated. “I don’t think he could do both if he chose baseball first, but he could probably establish himself in football, then come over to baseball.”

Murray Signed a $4.6 Million Contract With the A’s

Murray signed a $4.66 million deal with the A’s which was just slightly below the $4.76 million number generally associated with the ninth pick, per MLB.com. Financially, MLB could not compete with Murray’s earning potential in the NFL.

Murray signed a four-year, $35 million contract with the Cardinals, per Spotrac. Since he never played professionally for the A’s, Murray had to pay back most of his signing bonus.

“Kyler Murray will return $1.29 million of the $1.5 million signing bonus money the Oakland A’s gave him last year. He forfeits the remaining $3.16 million due March 1. The A’s will put him on the restricted list and retain Murray’s rights, but they don’t get a comp draft pick,” ESPN’s Jeff Passan tweeted.

Sports Illustrated reported that the A’s final offer included $14 million in guaranteed money along with a spot on the 40-man roster. It was not enough for Murray to change his mind.

According to a source close to the family, the A’s contingent that visited Kyler in January offered him a contract worth $14 million in guaranteed cash, in addition to his signing bonus. (The deal would have required that Oakland take the extreme step of adding Murray to its 40-man roster and would have paid out a figure similar to that of a top 10 NFL draft pick. For context, Bears linebacker Roquan Smith, who went eighth in 2018, signed a four-year deal worth $18.5 million.) But Kyler turned down that offer, and his family has kept those financials out of the media.

The Cardinals quarterback would have had every chance to succeed as an MLB player. Oklahoma coach Skip Johnson managed Murray in college and compared his game to Andrew McCutchen.

“At the plate, you would think a guy with his athleticism would have more aptitude to play defense than offense, but he’s the opposite; he’s more of an offensive player than a defensive player,” Johnson told MLB.com. “He’s still in the process of maturing as an athlete. He’s dynamic, he’s physical. He reminds me of Andrew McCutchen.”

Murray hit .296 with 47 RBI, 10 home runs, 56 hits and 46 runs in his last season at Oklahoma. We will have to wait and see if Murray ever finds his way back to the baseball diamond, but the Cardinals are planning on having him under center for at least the next decade. 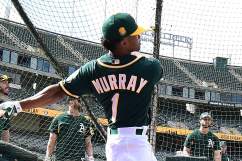