Getty Kyler Murray was scheduled to report to the Oakland A's after the college football season prior to entering the NFL draft.

Kyler Murray signed a $4.66 million contract to play professional baseball for the Oakland A’s, but the former Oklahoma quarterback noted he is now focused on football. Murray parlayed a successful 2018 college baseball season with the Sooners to become the No. 9 pick in the MLB draft.

Murray hit .296 with 47 RBI, 10 home runs, 56 hits and 46 runs. Murray is trading in his outfield glove to be the future face of an NFL franchise. Murray is projected to be a top 10 pick in the NFL draft. Despite leaving the door open for the MLB possibility in prior interviews, Murray recently told ESPN he has no plans to try pro baseball in the future.

“For me, it was something I’ve known for a while,” Murray told ESPN. “That organization, being with the A’s, was the best possible situation for me just because they were so great throughout the football season, kind of leaving me alone and letting me do my own thing, and at the same time letting me know how much I meant to them and that type of stuff. Telling them was tough…I mean, they can hold out all the hope they want to. I’m going to play football.”

The A’s sent a group to meet with Murray in January to try to convince him to uphold his commitment to play baseball. Oakland allowed Murray to play one season of college football as part of their original agreement, but Murray played so well that his NFL draft stock soared. USA Today’s Bob Nightengale detailed Murray’s meeting with Oakland.

“The Oakland #Athletics have a contingent, led by president Billy Beane, meeting today with Heisman Trophy winner Kyler Murray in hopes of persuading him to forego the #NFL and play baseball for them. They drafted him 9th overall last summer and gave him a $4.66 million bonus,” Nightengale tweeted.

Why did Murray have a sudden change of heart from baseball to football? It sounds like Murray received much better NFL feedback than he originally expected.

“The night I got drafted to the A’s — obviously it was a great day of my life — but I’ve been a football player my whole life,” Murray noted to ESPN. “I didn’t know how the NFL felt about me before this season because I hadn’t played. Going into this [football] season, [the goal] was to put myself in the best position possible. Obviously, when you win, good things happen. A lot of good stuff happened this year.”

Murray appears locked into the first round and has a good chance of being selected inside the top 10 in April’s draft. The Giants (No. 6) and Jaguars (No. 7) are two teams with high draft picks that could be looking at quarterbacks. 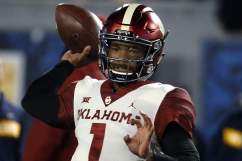