Getty Russell Wilson met up with Baker Mayfield prior to the 2018 NFL draft.

Baker Mayfield responded to Rusell Wilson’s rushing touchdown with one of his own in the first quarter of the Seahawks-Browns Week 6 matchup. Both touchdowns came on similar plays that were designed for the quarterback to look to pass when the middle of the field opened up inside the red zone. Mayfield and Wilson both rushed up the middle of the field for the score on consecutive drives.

Here is a look at Wilson striking first with his touchdown.

Not to be outdone, Mayfield also found the endzone just a few minutes later.

Baker Mayfield off to a nice start.

He's 6-for-8 passing to go with this touchdown run in the first quarter.#OUDNA | #DawgPound pic.twitter.com/R4HedhzgDA

Wilson & Mayfield Built a Relationship Prior to the 2018 NFL Draft

Wilson hosted an ESPN series entitled QB2QB prior to the 2018 NFL draft where he interviewed some of the top prospects, and Mayfield was one of the players that appeared on the show. The two bonded over a perceived slight about their lack of height compared to other quarterbacks.

Heading into the Seahawks-Browns game, Wilson admitted that Mayfield being selected with the No. 1 pick was significant for shorter quarterbacks. Wilson slipped all the way to the third round largely due to concerns about his height.

“Yeah, we did QB2QB. It was cool getting to know Baker and just being around him,” Wilson noted in his press conference. “His competitive nature and everything else. Just seeing him get drafted No. 1 overall was pretty cool for the shorter guy. I know he is a great competitor. He has always loved winning.”

Wilson was born in Ohio, but this week’s game marked the quarterback’s first time playing an NFL game in Cleveland. Wilson noted that he moved away from the area when he was young but still has family in the area.

“I’m excited to play there,” Wilson said, per Pro Football Talk. “I haven’t played in Cleveland yet. I’m from Ohio. I was born there in Cincinnati. Haven’t played [in Cleveland] yet. Growing up, I used to watch the games because Cincinnati, Ohio, Cleveland, stuff like that. I’m excited to play there. First time playing there. It’s a tough environment, I’ve always heard. I always hear it’s super loud. They have a great crowd and a really good team too. We’ve got to be ready to go.”

Prior to the game, Wilson took to Instagram to show his excitement for the road matchup.

“To the Land… TOGETHER We Go,” Wilson noted on the post. 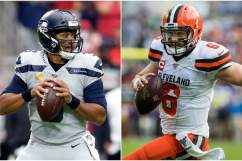