After Rashaad Penny received a massive spike in carries, there is some belief the Seattle Seahawks may have been showcasing the running back for a potential trade ahead of Tuesday’s deadline. Penny was part of 18 plays against the Falcons, which is up from his two snaps the previous week as The News’ Tribune’s Gregg Bell reported.

“#Seahawks snaps on my way out of Atlanta: Was Rashaad Penny going from 2 plays last week to 18 a showcase for a possible trade? Defense goes nickel instead of base far more vs Falcons passing, with DB Jamar Taylor at 44% of snaps. @thenewstribune,” Bell tweeted.

NFL Network’s Ian Rapoport reported that the Seahawks have “received calls” about Penny from teams in need of a running back. Penny is a former first-round draft pick with little wear on his body since entering the NFL, which likely makes him the most tradable asset the Seahawks have.

The Seahawks have received calls from RB-needy teams and a potential deal for former first-round running back Rashaad Penny is possible, per colleague Mike Garafolo. With Chris Carson not relinquishing the top job, Penny may have the most value as a trade name. But obviously, they won’t give Penny away for…a penny on the dollar.

The Seahawks have already made one move ahead of the deadline by acquiring safety Quandre Diggs from the Lions. Detroit could once again be a team to watch after losing running back Kerryon Johnson for the season. Pride of Detroit’s John Whiticar detailed why the Lions could be a potential landing spot for Penny.

“Something people might overlook when it comes to RB trades: Nick Bawden was the lead blocker for Rashaad Penny at San Diego State. I bet Bob Quinn has seen plenty of footage of Penny…If Penny was available when the Lions picked in the 2nd last year, it wouldn’t have surprised me if they picked him over Kerryon,” Whiticar tweeted.

The Seahawks Could Target Help at Tight End, Offensive Line or Defensive Line

Despite the uptick in snaps, there is no guarantee that the Seahawks will move Penny by the deadline. Seahawks head coach Pete Carroll praised Penny after the team’s win over the Falcons. With as much as the Seahawks like to run the ball, Seattle may opt to keep Penny and use both backs.

The challenge is the Seahawks have needs at other positions across the roster. Seattle has sustained season-ending injuries to Justin Britt and Will Dissly making tight end and offensive line two areas of need.

The Seahawks have also not received enough production from their pass rush despite adding Jadeveon Clowney and Ziggy Ansah. It would not be a surprise if the Seahawks looked to add another pass rusher before the deadline. 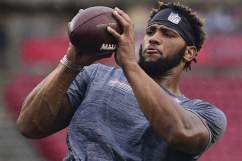 Seattle Seahawks Looking to Make a Trade & O.J. Howard Is Name to Watch