Tua Tagovailoa to the medical tent after this nasty looking ankle injury. pic.twitter.com/AM9cuV11Dx

Tua Tagovailoa sustained a gruesome injury in Alabama’s matchup with Tennessee as the Alabama quarterback’s ankle buckled while being tackled. Tagovailoa was ruled out for the game and was later seen getting into an ambulance. ESPN reported that Tagovailoa is out of his uniform and is favoring his left leg while still being inside the stadium.

Tua Tagovailoa is heading out with the ambulance ??pic.twitter.com/OUn18vDqIb

“Saban says ‘twisted ankle of some kind’ for Tua, isn’t sure if he can come back tonight,” Wolken tweeted.

After the game, Saban noted that Tagovailoa had a high-ankle sprain which will likely keep the quarterback out “a week or two,” per ESPN. Mac Jones took over at quarterback for Alabama. Heading into halftime, Saban provided very little information on the severity of Tagovailoa’s injury.

“I don’t know what Tua’s status is,” Saban told Alabama radio, per Sports Illustrated. “We will see when we go in at halftime. We obviously need to play better on defense too to get off the field and get better field position.”

Tua Tagovailoa’s Brother Is Also on the Crimson Tide’s Team, But Was Beat Out by Mac Jones for the Backup QB Role

Tagovailoa’s brother, Taulia Tagovailoa, was a highly touted recruit who followed in his brother’s footsteps to Tuscaloosa. Jones was able to beat out the younger Tagovailoa brother for the backup quarterback role. Back in August, Jones was deemed to be “way ahead” of the other quarterbacks on the roster to backup Tagovailoa.

“Mac Jones ‘is way ahead of the other guys’ in Alabama’s backup QB competition, Saban says. Had 1st team reps in both scrimmages,” AL.com’s Michael Casagrande tweeted.

Here is a look at Tagovailoa heading back to the locker room.

Tua leaves the field and heads back to the locker room near the end of the first half. pic.twitter.com/r8FLBkTfUm

The significance of Tagovailoa’s injury is unlikely to be known until the test results are revealed. If Tagovailoa is forced to miss time, this would mark the second straight season the Alabama quarterback has suffered a significant injury. Pro Football Network’s injury analyst Duane Scotti offered his assessment of the ankle after seeing the play.

Definitely medial ankle sprain at a minimum of the deltoid ligament. Possible fracture. They will X-ray and if negative for fracture they will send him for MRI to see severity of ligament damage.

The timeline for an injury like this: Fracture 6 weeks to heal and 12 weeks for return to football. No fracture is variable based upon severity of ligament sprain. Could be as early as 2 weeks to as most as 8 weeks for grade 3.

AL.com’s Mike Rodak noted that both the Alabama and Tennessee starting quarterbacks were knocked out of the game.

“Both starting quarterbacks, Tua Tagovailoa and Brian Maurer, have been knocked out of tonight’s Alabama-Tennessee game with injuries. Their backups: Mac Jones: 3-of-6, 42 yards Jarrett Guarantano: 2-of-8, 9 yards Alabama leads 21-10 at halftime,” Rodak tweeted. 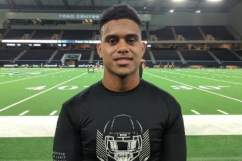 Read More
Alabama, College Football, Football, NFL Draft
What happened to Tua Tagovailoa? Find out the latest updates on Tagovailoa's injured ankle and see the video of the gruesome injury.