Russell Wilson was rumored to have pushed the Seattle Seahawks to sign both Antonio Brown and Josh Gordon. During a recent interview with ESPN’s Keyshawn Johnson, Wilson essentially confirmed that he wanted the Seahawks to get both receivers.

“For the Seahawks, we are trying to win a Super Bowl,” Wilson said on Monday Night Countdown. “Trying to find every way to win, I think both of those guys, I’ve been around both of those guys. Both are tremendous talents, some of the best receiver, talent-wise, to ever play the game kind of talent. So, any time you get an opportunity to play with a guy like that you definitely want to. I think with Josh, when the Patriots released him we were really excited about the opportunity to potentially bring him in. He’s been fitting in great. He’s taken on the challenge. He’s studying like crazy and the good thing is we get to add him to a lot of great other receivers, so it’s going to be a great thing for us.”

The Seahawks ultimately were successful in claiming Gordon off waivers after most of the NFL passed over the receiver. Seattle opted not to bring in Brown with the ongoing NFL investigation, but ESPN’s Adam Schefter reported that Wilson pushed the franchise to bring in the controversial receiver.

Before they claimed wide receiver Josh Gordon on waivers Friday, the Seattle Seahawks had been doing their due diligence on free-agent receiver Antonio Brown, league sources told ESPN.

Even star quarterback Russell Wilson was pushing the Seahawks to sign Brown before they claimed Gordon, according to sources.

Wilson has already connected with Gordon and tried to make the transition as smooth as possible. Gordon’s off-field struggles have been well-documented, but the Seahawks quarterback believes the receiver will be a good fit in Seattle.

“We’ve done that already [provided support],” Wilson told ESPN. “Josh and I have gotten to know each other over the years and I think since he’s gotten here he’s been in the playbook. He’s come over to the house a couple times, you know, all that kind of stuff. He’s been studying the film and everything else. I think for him, this is a great culture. This is a great place to be. I haven’t been anywhere else, so all I know is this culture. Where we are here and we’re about each other. We are about dedicating our crafts, our skillsets, our time to each other. And Coach Carroll does a great job of that. Us players, we do a great job of that. It’s about helping one another.”

You can watch Wilson’s full interview with Johnson for ESPN’s Monday Night Countdown in the above video.

Gordon Is Expected to Play in the 49ers-Seahawks Game

Gordon is officially a game-time decision, but the Seahawks have displayed optimism that their newest receiver will play against the 49ers. Carroll noted there was a “good chance” that Gordon will play on Monday night. During his weekly presser, Wilson admitted that he expected Gordon to be on the field.

“It’s a coach question but I think he’ll definitely probably get in there [against the 49ers], for sure,” Wilson noted in his press conference. 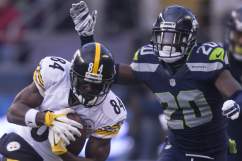