Getty Russell Wilson pictured with wife Ciara at the 2019 ESPYs.

“Unbelievable! Surreal that we had the incredible opportunity to join the @SoundersFC franchise and family this year,” Ciara noted on Instagram. “We dreamt of the moment for another #MLSCup for the team, and that dream came true today! So proud of our guys and grateful to be a part of the incredible journey! Our guys kept the faith, fought hard, and they believed, and we now have our 2nd MLS Cup! 1st one as a team owner! God is good! Go @SoundersFC!! #ThisIsIt #MLSCUPChampions #ProudTeamOwner.”

Wilson was not able to watch the game as the Seahawks were on a flight to San Francisco for their Monday Night Football matchup against the 49ers. The Seahawks quarterback nailed his pre-match prediction exactly as Wilson picked the Sounders to notch a 3-1 victory. Wilson posted a congratulatory message to the Sounders to his Instagram Story while he was on the team’s flight.

“So on the flight right now headed to San Francisco and just got the news, baby,” Wilson exclaimed on Instagram. “Sounders MLS champs! Let’s go! Pilot just gave me the score. It said 3-1, 3-1! Let’s go Sounders! Great job, fellas. Proud of y’all. Let’s go Seattle. That one was for you. This is it! Let’s go!”

Rapper Macklemore and actor Drew Carry are also part of the new ownership group with the couple. It is unclear just how much of an ownership stake Wilson and Ciara have. The couple along with the other notable celebrities are likely minority owners as Adrian Hanauer is the majority owner.

The couple has one daughter, Sienna Wilson, together and Ciara has a son, Future, from a previous relationship. Ciara noted in the press release that being part of the ownership group is great for their kids to see.

“This is not only a special moment for Russ and I, but for our kids as well,” Ciara noted to SoundersFC.com. “When we walked into the building and our kids were running around with their names on their little jerseys, it meant a lot for so many reasons. It’s an honor to join the Sounders team and have the unique opportunity to represent female ownership within major league sports. The team has already done some amazing things, but I believe the best is ahead and we’re excited to be part of that.”

Exactly where I wanted to be on my B Day!❤️ Babe, you’re the best planner! You’re always so thoughtful. Being in your arms is all I need! Truly grateful. #BirthdayLove

Wilson recently pulled out all the stops for his wife’s birthday. The couple celebrated Ciara’s big day by renting out a yacht. Wilson arranged for balloons, flowers and a festive birthday meal to celebrate the occasion. Ciara took to Instagram to give the Seahawks quarterback a shout-out.

“Exactly where I wanted to be on my B Day!❤️ Babe, you’re the best planner! You’re always so thoughtful. Being in your arms is all I need! Truly grateful. #BirthdayLove,” Ciara said on Instagram.

Days later the couple broke the internet by dressing up as Jay-Z and Beyonce for Halloween. Be sure to check out our story showing all the footage as the couple remade the iconic couple’s music video. 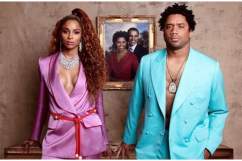