It has been a few years since Pete Carroll and Bruce Arians were foes in the NFC West as the Seahawks battled the Cardinals. Carroll still has a good memory and admitted that this week’s matchup against the Bucs has a little extra significance given their history against one another.

Arians has repeatedly bragged about his success at Century Link Field. Even though Arians’ team is wearing different colors, Carroll noted he would like to see the Bucs have a long flight home from Seattle.

“He’s pretty proud of it, what he’s done here, so I wouldn’t mind him having to go home, fly across the country without a win this weekend,” Carroll told KIRO 97.3 Seattle. “So we’re gonna do the best we can to get that done.”

Carroll is referring to Arians calling Century Link his “home field” while he was coaching the Cardinals. The Seahawks coach noted that Seattle also did pretty well in Arizona during those matchups.

“He’s a really good coach and he’s got a real style about him, a lot of charisma and all and he’s fun to coach against,” Carroll explained to KIRO 97.3 Seattle. You know, we beat him down in their place too a lot so I’d like to kinda put this thing to rest here.”

The controversy started in 2017 when Arians was caught on camera telling his team that Century Link Field was their “home field.” Arians later said the comments were meant to be private.

Leading up to the Seahawks-Bucs matchup, Arians noted that Seattle was his favorite place to play. Arians’ called it a “soccer” environment that teams have to prepare for on the road.

“It’s probably my favorite place to play because it’s such a great atmosphere,” Arians explained to The Seattle Times. “The fans are fantastic. We’re just teaching our guys to feed off that energy from the crowd like it’s a home crowd. It always comes down to a very, very close game.”

Seahawks fans are unlikely to think of Arians fondly, but the former Cardinals’ coach does have a strong track record against the Seahawks. Under Pete Carroll, the Seahawks have the second-best home record in the NFL, and Arians was 4-1 in Seattle when he coached the Cardinals, per The Athletic. Carroll admitted that he is “aware” of Arians’ success at Century Link Field.

“I guess it’s just my kind heart, just feeling nice about Bruce, wanting to give him a good run and take care of him, always looking after him as a fellow coach,” Carroll noted to The Athletic. “I don’t know. I have no idea. He’s been good at it, that’s for sure. We’re aware of it. The good thing is Bruce isn’t playing. It’s the players, and hopefully, we can hold these guys off and have a good game against them.”

After one win over the Seahawks, Arians began a 2017 post-game press conference once again referring tO Century Link Field as “his house.”

“Thank you, guys, for coming to my house,” Arians said, per AZ Central. “I hope you get home safe.”

Carroll made it clear that he would like nothing more than for Arians to eat some humble pie in his first game in Seattle as the Buccaneers coach. We will see on Sunday whose house it is. 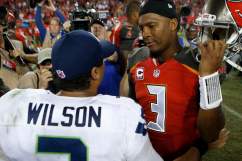