Getty Joe Burrow is the favorite to go to the Bengals with the No. 1 pick in the 2020 NFL draft.

The NFL draft order will be set after tonight’s games and our latest mock draft reflects the current standings. The Bengals already locked up the No. 1 pick heading into Week 17.

There has been little good news in Cincinnati this season, but Bengals fans were watching the Peach Bowl with anticipation as LSU quarterback Joe Burrow put on a clinic setting numerous College Football Playoff records. Burrow is the clear favorite to be wearing orange and black next season as the team’s quarterback of the future.

The Redskins, Lions, Giants and Dolphins all have a chance at the No. 2 pick heading into the season finale. This pick is still significant as Ohio State pass rusher Chase Young is likely to be selected behind Burrow.

The big question heading into the draft will be what teams do with Tua Tagovailoa. Teams like the Dolphins have been consistently linked to the Alabama quarterback, but it will be interesting to see if his hip injury will cause teams to pass on him as he continues the rehab process.

Tagovailoa’s injury leaves the door open for other quarterback prospects like Justin Herbert to jump him on draft day. The Athletic’s Dane Brugler still has Tagovailoa as a top-five pick in his latest mock draft with the Bama signal-caller landing in Miami.

Until NFL medical staffs get involved and we have a better understanding of his rehab, it is simply impossible to predict where Tagovailoa will go in the draft. But if his recovery is as positive as Alabama has made it seem, this would be a possible scenario. With Josh Rosen (and maybe Ryan Fitzpatrick) under contract for Miami in 2020, Tagovailoa won’t be pushed to play before he is ready.

This is all assuming Tagovailoa still declares for the draft as many expect he will. While quarterbacks will get a lot of the attention, this is an extremely deep wide receiver class. We have eight receivers projected to be selected in the first round in our latest mock draft.

Here is a look at our latest NFL mock draft based on the current standings, courtesy of Tankathon.com. We will continue to update the order after the late-afternoon games have been completed. 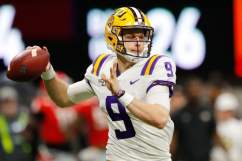