Patrick Mahomes’ girlfriend Brittany Matthews is a regular at Chiefs games, but things turned ugly for the quarterback’s significant other at Gillette Stadium. Matthews noted in a series of tweets that she along with Mahomes’ brother, Jackson Mahomes, had to be moved to a “safe place” after Patriots fans were harassing them during the game.

“As soon as we sit down, drunk dude ‘hey everyone this is patrick mahomes girl and brother, let’s give them s—‘ This shall be fun ?,” Matthews explained on Twitter. “…This place is horrible, people already yelling every time I stand up, am I not aloud to stand up for football game???…I was told if I stand they will call security and kick us out, can’t stand for your team? Some fans y’all are ??…Gillette security came and got us and moved us to a safe place ?? that’s how you know it was bad??”

Matthews continued to provide updates during and after the game.

Everyone was sleeping on us, so we woke em up??? #chiefskingdom

Mahomes and Matthews have been together since their high school days. Matthews noted on Instagram that Gillette Stadium security moved them after they saw on camera that they were being harassed by the surrounding fans.

“I’m here & these fans will NEVER keep me away ?????? #chiefskingdom
Update: Gillette security cane and got us said we have cameras everywhere and we have seen you getting harassed so we are gonna move you to a safe section!” Matthews said on Instagram.

After the Chiefs win, Matthews posted a photo with Mahomes noting that people were “sleeping” on Kansas City.

“Everyone was sleeping on us, so we woke em up??? #chiefskingdom,” Matthews explained on Instagram.

Matthews Had a Message for Patriots Fans After the Chiefs Victory

I’m here & these fans will NEVER keep me away ?????? #chiefskingdom Update: Gillette security cane and got us said we have cameras everywhere and we have seen you getting harassed so we are gonna move you to a safe section!

It was Matthews who got the last laugh as the Chiefs ended the Patriots’ home winning streak. After the win, Matthews had a message for Patriots fans who wanted to bring up Super Bowls.

“All patriots fans ‘we still have 6 Super Bowls’ Lololol Once patrick has been in the league as long as Brady, then chat to me about Super Bowls! Patrick is 24, brady is 42? you just wait????,” Matthews said on Twitter.

Mahomes’ brother responded to Matthews’ tweet with his own thoughts.

“Everyone is caught up in the PAST, it’s a new era/decade??,” Jackson Mahomes emphasized on Twitter.

The Chiefs quarterback sustained a hand injury early in the Patriots game, but did not miss any plays. The Chiefs announced the X-rays were negative, and Mahomes is not expected to miss any time, per ESPN.

Patrick Mahomes should be available to play for the Kansas City Chiefs on Sunday after X-rays on his injured passing hand were negative, coach Andy Reid said Monday.

Reid said Mahomes’ passing hand, which was injured when he fell awkwardly early in Sunday’s win over the New England Patriots, was “bruised up pretty good, but there’s no break in it.” 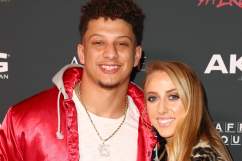