For the seventh time, Atlanta Falcons Julio Jones was selected to play in the NFL Pro Bowl but has decided not to participate this year. 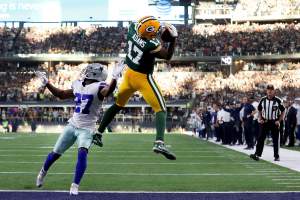 Getty Davante Adams #17 of the Green Bay Packers pulls in the game-winning touchdown against the Cowboys.

This will be Adams’s third consecutive Pro Bowl appearance. At the end of the 2019 season, Adams finished with 83 interceptions, ranked fourth for receptions per game and ranked fifth for receiving yards per game. He missed a total of four games, but came back from an injury and still ranked high.

Jones finished the season with 99 catches for 1,394 yards and six touchdowns.

Hooper will be replacing San Francisco 49er’s, George Kittle. Kittle will be heading to the Super Bowl instead. This will be Hooper’s second consecutive Pro Bowl. As for Jarrett, it will be his first appearance.

Hooper still made career highs after missing three games with a knee injury this season. In 13 games he made 75 catches for 787 receiving yards and six touchdowns. Hooper will become a free agent in March but said during locker room cleanout, he hopes to stick around. Last Pro Bowl, at 24-years-old, Hooper caught a 20-yard touchdown pass.

Jarrett played in every game during the 2019 season for the Falcons. He finished with career-highs of 69 tackles, 16 quarterback hits, and 7.5 sacks.

READ NEXT: Is Tua Tagovailoa an Option for Falcons?