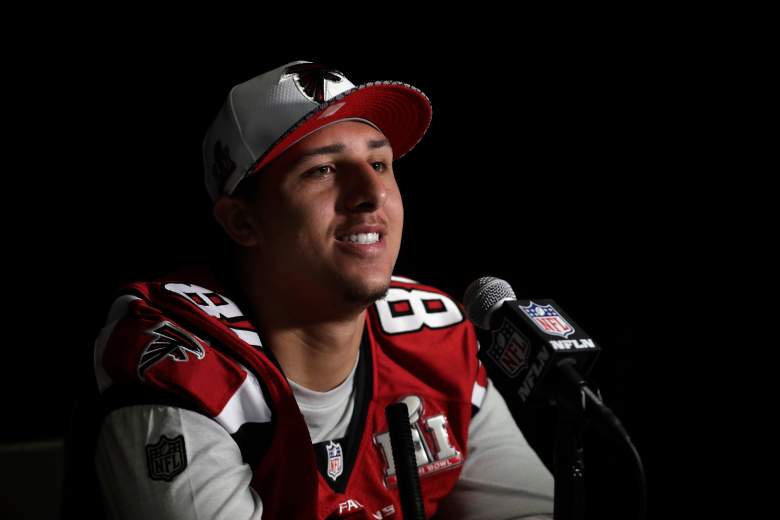 Super Bowl LI is about to begin, and this year, Austin Hooper will be one of the key players to watch.

Here’s what you need to know about Atlanta Falcons tight end Austin Hooper. 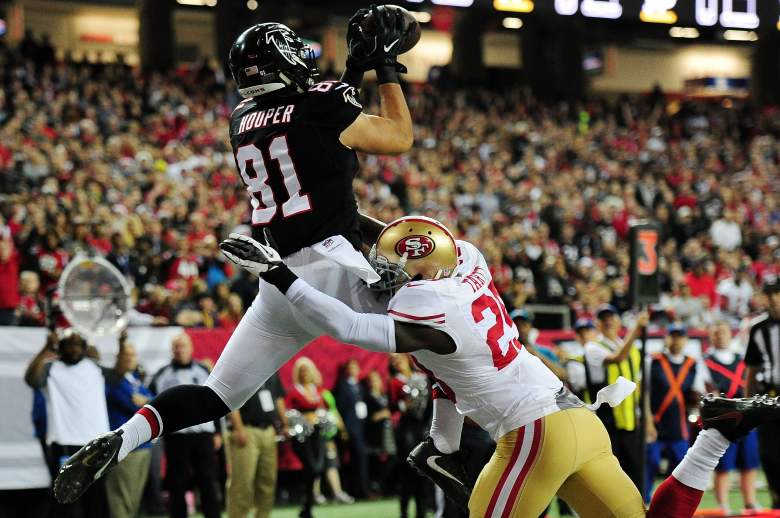 Austin Hooper of the Atlanta Falcons scores a touchdown over Jaquiski Tartt #29 of the San Francisco 49ers during the first half at the Georgia Dome on December 18, 2016. (Getty)

Austin Hooper was born on November 4th, 1994 in San Ramon, California; he attended De La Salle High School in Concord, California, where he was a quarterback for his freshman and sophomore years.

Hooper then played defensive end for De La Salle during his junior and senior years. Throughout these years playing defense, he performed 63 solo tackles and 27 assists, with an average of 3.3 tackles per game.

2. He Was Recruited by Stanford University in 2013 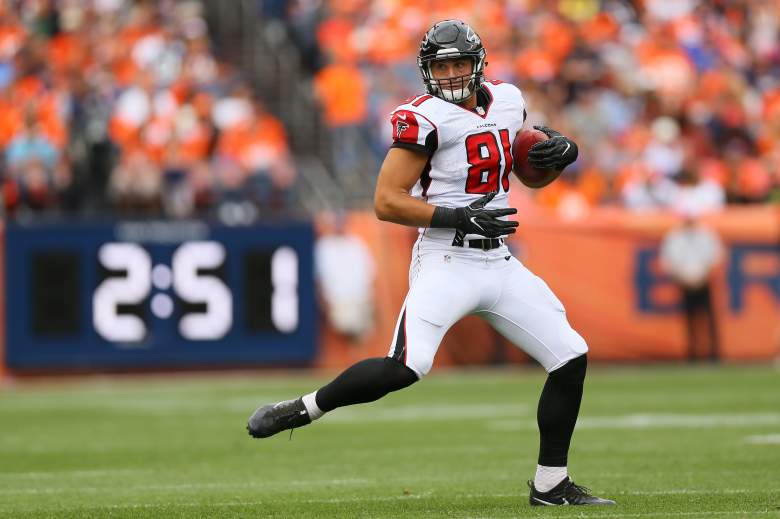 Austin Hooper of the Atlanta Falcons catches the ball in the second quarter of the game against the Denver Broncos at Sports Authority Field at Mile High on October 9, 2016. (Getty)

Austin Hooper was recruited by Stanford University in 2013; he says that he chose Stanford because they were the only school to offer him a tight end position as opposed to a defensive line.

“Being a Cardinal is something I am very proud of,” he said in an interview with Fansided. “It means you have to work hard both in the classroom and on the field.”

Hooper added that coming from a defensive background is an advantage to him and influences how he plays.

“Coming from a defensive background, I try to play physical and never shy away from contact,” he told Fansided. “I pride myself on being a true tight end. One that blocks at a high level and runs clean routes, while making every catch that comes my way regardless of the circumstances.”

3. He Finished at Stanford With 74 Receptions 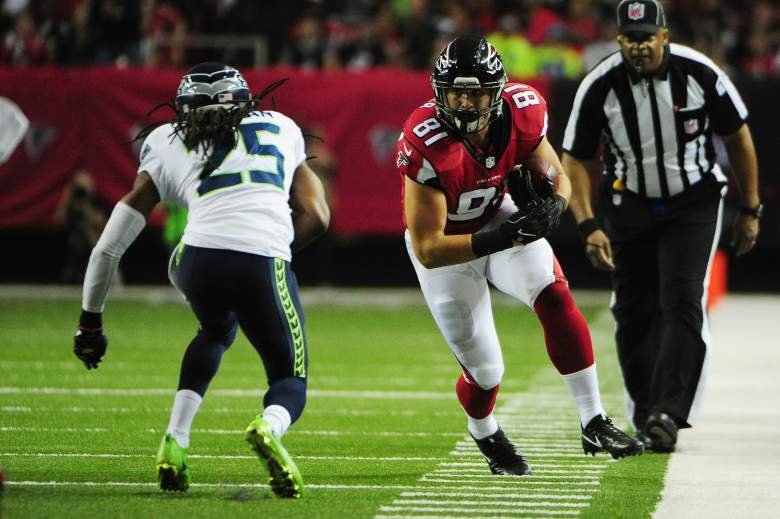 Austin Hooper runs the ball against the Seattle Seahawks at the Georgia Dome on January 14, 2017 in Atlanta, Georgia. (Getty)

4. He Was Recruited to the Atlanta Falcons in the Third Round of the 2016 Draft 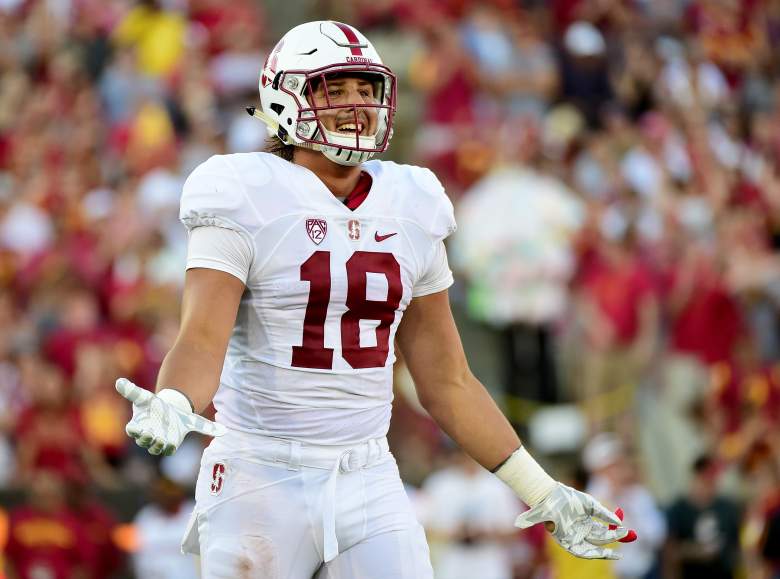 Austin Hooper of the Stanford Cardinal during the second quarter against the USC Trojans at Los Angeles Coliseum on September 19th, 2015. (Getty)

During the 2016 NFL draft, Austin Hooper was recruited to the Atlanta Falcons. He was the 18th pick in the third round and the 81st pick overall.

On the Atlanta Falcons fan site The Falcoholic, Hooper was described as the second best tight-end in the draft behind Hunter Henry; Henry ended up being drafted to the Los Angeles Chargers.

In the 2016 regular season, Hooper finished with 19 receptions, 271 total receiving yards and an average of 14.3 receiving yards per game. During the playoffs, he recorded three receptions for 33 yards. As pointed out by FanRag, of his 19 catches, 16 went for first down.

Hooper also scored three touchdowns during the season, two of which were from red-zone passes.

5. He Was Sidelined in December 2016 Due to a Knee Injury 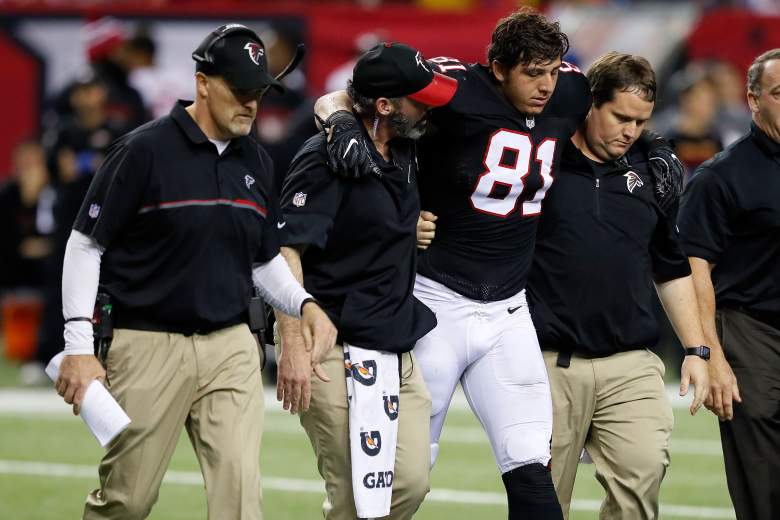 Austin Hooper injures his knee during the second half against the San Francisco 49ers at the Georgia Dome on December 18, 2016. (Getty)

Hooper missed the last two games of the regular season due to a knee injury.

According to ESPN, Hooper suffered a Grade 1 medical collateral ligament sprain in his left knee during a December 18th game against the San Francisco 49s.

Hooper returned to practice on January 4th. He told ESPN that he was relieved the injury was not more serious and that he did not need to undergo surgery.

“We were just doing an outside zone-type play and somebody just fell on me at the right ankle,” Hooper said. “I knew instantly, when it happened, what happened. I had the same injury in high school in the opposite knee. It was almost the same exact experience when it happened. It was the same spot and the same grade.”

Hooper went on to say that he “lucked out for sure.”