The Warriors were slated to practice on Sunday in San Francisco. Then a report from TMZ came out saying that Lakers legend Kobe Bryant, along with four others was killed in a helicopter crash in Calabasas. Golden State then canceled practice.

According to the San Francisco Chronicle’s Connor LeTourneau, “The team is too distraught to address media this afternoon.”

The Warriors canceled practice when news broke about Kobe Bryant's passing. The team is too distraught to address media this afternoon, and Golden State expects to have a news release shortly with reflections on Kobe's legacy.

Around the league, though, the games that were already on the schedule proceeded as expected, even as players and teams struggled to deal with the shock of losing one of the game’s icons. A source said the league did not have time to plan for canceling or rescheduling early games.

But games later in the schedule would not be moved either.

According to TMZ’s report, the crash came after 11 a.m. Pacific Time. Eyewitnesses reported hearing the engine sputtering. “A fire broke out,” the report read. “Emergency personnel responded, but nobody on board survived. 5 people are confirmed dead.”

The Warriors’ canceling of practice was just the beginning of what will be a deep mourning period for a league that will struggle to cope with the loss of one of its greatest ever players.

On NBATV, ahead of its Sunday broadcast, a moment of silence was observed with this image of Bryant: 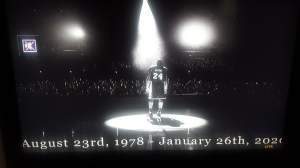 Bryant, just 41 years old, was the league’s No. 3 all-time scorer with 33,643 points until Saturday, when he was passed by LeBron James during the Lakers’ game in Philadelphia. Bryant congratulated James on Instagram, writing, “On to No. 2!”

The Lakers won five championships with Bryant, including three during his tumultuous years with Shaquille O’Neal and two more in 2009 and 10. He was a 15-time All-NBA honoree and the 2007-08 MVP.

NBA Plays on Despite Grief Over Kobe Bryant’s Death

There were eight games on the schedule for Sunday, starting with Houston at Denver at 3:30. The league announced no provisions for changing or canceling games and team sources indicated that the schedule would proceed.

But taking the floor proved to be difficult.

During the pregame layup lines, shown on NBA TV, Rockets guard Austin Rivers was appeared to be in tears. The teams did not cancel the game but agreed to observe a moment of silence before tipoff. “Rest in peace, Mamba,” the team’s PA announcer said.

In the Raptors-Spurs game, the teams agreed that they would allow the shot clock to expire in honor of Bryant’s uniform number, 24, in each of their first possessions. Spurs assistant Becky Hammon was seen wiping away tears just after the game started.

Also on the schedule: Raptors at Spurs; Wizards at Hawks; Nets at Knicks; Clippers at Magic; Suns at Grizzlies; Celtics at Pelicans; and Pacers at Trail Blazers.

According to Chris Herrington of the Daily Memphian, “The team has not heard anything about tonight’s game being canceled.” Herrington pointed out that could change for the Phoenix-Memphis game.

Despite rumors about cancellations, a Grizzlies source says team has not heard anything about tonight's game being cancelled. That is not definitive. But that's the info at this moment.

In New Orleans, Andrew Lopez of ESPN reported that the Pelicans’ game against the Celtics would go on as planned. But the team’s locker rooms, which are normally opened before the game, would be closed until after the game. Both coaches were slated to talk pregame as scheduled.

The late game, with the Pacers in Portland, was under consideration for a move. Ultimately, the league decided to go ahead with the game.

In the coming days, the NBA is expected to put together a plan to honor Bryant. But in the immediate aftermath of news about his death, the games were set to go on.