Marshawn Lynch walking to the podium after a game is about as rare as the running back being tackled by the first defender that hits the Seahawks legend. Yet, this is exactly what happened after the Seahawks loss to the Packers.

Lynch’s future with the Seahawks remains up in the air, but it sure felt like goodbye when the running back offered some parting words during his short interview. Lynch’s contract is once again expired and the running back was vague about his plans for next season.

You can watch the video of Lynch’s full interview below.

Lynch did not elaborate on the Seahawks’ loss but chose to focus on offering some of the younger NFL players a bit of wisdom on self-care. Lynch encouraged players to save their money and take care of their minds during his less than two-minute press conference. Lynch did it as only Beast Mode could noting players need to protect their “chicken” referring to their financial interests.

“Look, I’ll say like this though: This is a vulnerable time for a lot of these young dudes, you feel me?” Lynch noted, per The Seattle Times. “They don’t be taking care of their chicken right, you feel me? So if it was me, or if I had a opportunity to let these little young (teammates) know something, I’d say take care of y’all money, African, because that (stuff) don’t last forever now.”

Lynch went on to explain his experience in moving from a player into retired life.

Lynch also addressed the team in the locker room after the game. When asked about the speech, Russell Wilson declined to elaborate on what Lynch said to his teammates but reiterated how much he enjoyed playing with the legendary running back one more time. Seahawks’ linebacker K.J. Wright discussed Lynch’s message to the team.

“He just thanked us,” Wright said, per The Seattle Times. “It’s just, it’s all so surreal that it happened for him to come back, and to have a legend come back and look good was amazing. These past few weeks were great, just having him scoring each and every game. His presence was truly felt.”

It remains to be seen whether Lynch will return to the Seahawks next season. If this was goodbye, Lynch did it in Beast Mode style giving us what is sure to be one of the most viral videos of the NFL playoffs. 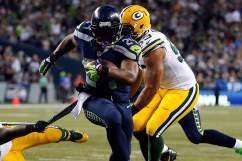