Getty Katie Sowers is an offensive assistant for the San Francisco 49ers.

Katie Sowers has been a trailblazer not only for the 49ers but for the entire NFL. Teams do not typically release the salary details for assistant coaches, and Sowers’ annual salary has not been made public. There is still some general data that gives us an idea of how much money Sowers could be making for the Niners.

The average salary for an NFL assistant ranges between $200,000 to $300,000 which is much less than a coordinator who can make more than $1 million each season, per CareerTrend.com. ESPN reported that a position coach’s salary typically starts at $400,000.

Sowers’ official title is offensive assistant but primarily works with the 49ers wide receivers. Whatever Sowers earns for the Niners, it is a major step up from her playing days in the Women’s Football Alliance. Sowers played eight seasons in the league where there are no salaries and players pay for the ability to play, per CNN.

Sowers is also starting to make money off the football field. Many football fans know Sowers from the Microsoft Surface commercial which is just one of several endorsements deals for the Niners coach. Sowers also posted an Instagram photo prior to the Super Bowl noting she has partnered with Kay Jewelers.

Sowers worked with Kyle Shanahan when he was the Falcons’ offensive coordinator. When Shanahan took the head coaching gig in San Francisco, he brought Sowers with him to the Niners to work with the wide receivers. Shanahan praised Sowers’ work and has openly discussed her impact since his days in Atlanta.

“She has done a hell of a job,” Shanahan told NBC Sports Bay Area, per CNN. “I loved having Katie around, loved her the year I had her in Atlanta. Some of the coaches came to me at the end of (training camp) and told me how much she’s helped and if there was a spot for her to keep her around.”

What a surreal week this has been. We are a day away from kick off and throughout my whole life as an athlete and coach, I’ve always had something to wear that personally reminds me not only of how far I’ve come but also how far I have left to go. This game is undoubtedly one of the biggest games of my life so I’m blessed to wear my exclusive Kay Jewelers X Le Vian chocolate diamond strawberry gold football pendant the entire weekend to be that reminder for me. Can’t wait to hear you on Sunday Niner Faithful. @KayJewelers @Levian_Jewelry #DisplayMyKay #LeVian #ad

Sowers’ first big break came well before Shanahan as she formed a relationship with Scott Pioli who was the Chiefs GM when the two initially met. Sowers was a volunteer youth basketball coach, and Pioli’s daughter was on the team, per The Guardian. The two struck up a friendship and Pioli would later be pivotal in helping Sowers get her first NFL opportunity.

After Pioli became an assistant for the Falcons’ front office, he convinced Atlanta to grant Sowers a fellowship where she could work with the team. Sowers impressed Shanahan enough that he offered her a full-time position after taking the job with the 49ers. Sowers admitted to being surprised that Pioli was so open to helping her get into football.

“What I failed to realize I was grouping him into a box,” Sowers noted to The Guardian. “Here’s this high up NFL executive and how’s he going to react? Knowing his heart and his desire to help people was something I never thought could be possible in everything I assumed about that culture.”

Pioli does not take credit for Sowers’ ascension, instead emphasizing the 49ers coach was qualified for the opportunity. 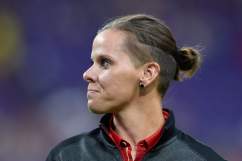