Krissie Boyle Newman is the wife of NASCAR driver Ryan Newman, who was seriously injured in a horrific crash at the end of the before the Daytona 500 on February 17, 2020. Just days before the race and devastating crash, the Newmans announced they had agreed to separate after 16 years of marriage.

Krissie released a statement on Twitter on February 13 announcing the news, writing, “After 16 years of marriage, Ryan and I have decided to amicably separate. We will continue to jointly raise our girls, while remaining friends and continuing to work together supporting Rescue Ranch. Thank you for the years of support and friendship. We ask that our daughters’ privacy be respected during this time.”

Krissie Newman expressed her concern on Twitter after Ryan was involved in a serious crash during the final lap of the Daytona 500. “Omg,” Krissie said on Twitter.

Here’s what you need to know about Krissie Newman:

1. Ryan & Krissie Are the Proud Parents of Daughters Brooklyn & Ashlyn

Ryan discussed a vacation with the family to the Ozark Mountains during a 2018 interview with RCR Racing.

“This trip was really meaningful,” Ryan explained to RCR Racing. “There were so many fun things as a family for us to do…The girls got to drive bumper cars and go-karts for the first time. They went tubing for the first time at Table Rock Lake. This trip was filled with a lot of firsts. The most special part for me was seeing them get to catch their first trout at Dogwood Canyon National Park. Ashlyn was the first to reel one in.”

The Newman girls are often seen in photos with Ryan and Krissie at NASCAR race tracks cheering on their dad, having grown up around the sport. They were at the track on Monday when Newman crashed.

Hours before the crash, Krissie Newman tweeted to a fan who asked if she was watching the race, “I am. Would love to see my girls in VL (Victory Lane) but always praying for a safe race.” Krissie Newman earlier tweeted a photo that appeared to show she was on vacation at a beach and was watching from there.

2. The Newmans Founded a Non-Profit Called Rescue Ranch That Is Dedicated to Animal Welfare

I prayed and cried and prayed for these sweet animals yesterday and last night. We had to leave yesterday and could not legally remove these animals from this awful property. Today we were told we had permission to go in and pull them out. I cannot tell you how happy that made me. I will post pics as soon as I can. @code3associates #ASAR

As Krissie Newman mentioned in her statement, they founded a non-profit organization called Rescue Ranch located in Statesville, North Carolina. The organization’s website described its mission as dedicated to animal welfare:

Formed in 2012 on 87 acres in Statesville, North Carolina, Rescue Ranch is a 501 (C) (3) non-profit animal welfare organization founded by Krissie Newman and her husband, NASCAR driver Ryan Newman. Rescue Ranch promotes humane education by focusing on rescuing on a fundamental level through hands-on learning and care for animals.

In 2014, Krissie Newman told Charity Life, “One of my favorite things about the Ranch is seeing the kids come here. It’s a lot of fun to sit down with groups and teach them about the different animals while also educating them about things like spaying, neutering and why it’s important to adopt from shelters and humane breeders instead of puppy mills.”

My Home, NC | Rescue RanchWhen NASCAR driver Ryan Newman and wife Krissie aren't at the race track, they're giving hands-on care to animals in need at Rescue Ranch. Ryan and Krissie, who is president of the ranch, are working to create a sustainable project benefitting their community.2017-11-21T19:36:20.000Z

Krissie Newman also uses her love for animals to help out after natural disasters. In the fall of 2019, she and others from Rescue Ranch traveled to the Bahamas to help animals who were stranded and in need of rescue after Hurricane Dorian. She was working with the International Fund for Animal Welfare (IFAW).

“It’s heartbreaking,” she told the Statesville Record & Landmark about the scene in the Bahamas. “It was a very eye-opening experience.” She there were hundreds of animals, mainly dogs, in need of help.

“Newman said the goal was to feed animals in place and allow them to remain near their homes if possible. When that was not possible, such as if the animal was injured or the situation was too dangerous for them to remain, they were taken to a makeshift shelter on Abaco. The ultimate hope, she said, is to reunite them with their owners,” the newspaper wrote.

In January 2019, Krissie Newman received an award from the National Motorsports Press Association for her work with Rescue Ranch, according to the Record & Landmark.

3. Ryan & Krissie Met on a Blind Date Through Church

Rescue Ranch – Ryan and Krissie NewmanMANY NASCAR DRIVERS HAVE CHARITIES THAT ARE NEAR AND DEAR TO THEIR HEART. BUT THERE'S ONE DRIVER TRULY WORKS FOR HIS FOUNDATION. CINDY FARMER HAS MORE ON RYAN AND KRISSIE NEWMAN'S RESCUE RANCH.2016-05-31T16:07:41.000Z

The former couple met through a church friend who set them up on a blind date in 2001, per Bleacher Report. The two hit it off and were married in 2004 prior to the NASCAR season.

Krissie graduated from Shippensburg University where she played soccer, per The Philadelphia Inquirer. She planned on becoming a lawyer prior to meeting Ryan but ended up getting involved with his race team when they were together.

Krissie Newman, whose maiden name is Krissie Boyle, is originally from New Jersey.

4. Krissie Did Not Follow NASCAR Prior to Meeting Ryan

Good to be enjoying the #outdoors. #daytonainternationalspeedway

There was a bit of a learning curve for Krissie when it came to auto racing. Initially, she knew little about NASCAR before they started dating but things quickly changed as their relationship progressed.

“Some [wives] are glamorous, but most of us are ordinary people,” Krissie told The Philadelphia Inquirer. “My grandparents had moved [to the Charlotte area]. I fell in love with the area. I was working for a judge. I knew nothing about racing. One day I came into the office and everyone was crying. When I asked why, they said, ‘Dale died.’ I thought Dale worked with us.”

The couple didn’t share a love of racing, but did bond over their shared love of animals, Ryan Newman told USA Today. “I always joke with people that when I met her dog, I met her,” he said in a 2014 interview with the newspaper.

Krissie Newman told USA Today about being a NASCAR wife, “There are glamorous parts – the motorcoaches, the private planes – but I respect it’s not always going to be there. And I’m a jeans, cowboy boots, T-shirt type person anyway. I’m not a makeup person. So this is something I enjoy.”​

5. Ryan’s Injuries Are Not Believed to Be Life-Threatening

Krissie’s days at the race track appear to be no longer, at least for now. She posted a photo from the beach on the day the Daytona 500 was originally scheduled. NASCAR released a statement noting Ryan sustained serious injuries that are not believed to be life-threatening.

Ryan Newman is being treated at Halifax Medical Center. He is in serious condition, but doctors have indicated his injuries are not life-threatening.

Ryan Newman remained hospitalized on Tuesday. In a statement, NASCAR said, “We appreciate your thoughts and prayers and ask that you respect the privacy of Ryan and his family during this time.”

Roush Fenway Racing, Newman’s team, issued a statement saying, “On behalf of Roush Fenway Racing and Ryan Newman’s family, we’d like to thank the NASCAR community for the incredible support and compassion for Ryan. Your thoughts and prayers have comforted us all. Ryan remains at Halifax Medical Center and we will provide further updates on his condition as they become available.”

Denny Hamlin, the driver who won the race, told reporters, “I think we take for granted sometimes how safe the cars are and number one, we are praying for Ryan.” 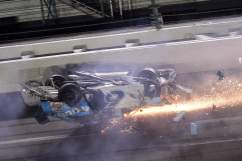 Read More
Auto Racing, Daytona 500, NASCAR, WAGs
Krissie Newman expressed her concern after Ryan Newman's crash in the Daytona 500. Learn more about the former couple and their work together in the community.