Getty Jadeveon Clowney may end up on a one-year contract.

The Seattle Seahawks will have to open up their checkbook in NFL free agency if they want to re-sign Jadeveon Clowney. The pass rusher is looking for a contract starting at $22 to $23 million per year, SNY.TV’s Ralph Vacchiano reported. The report also noted that the Giants are on Clowney’s “wish list” but did not elaborate on the additional teams he is considering.

According to an NFL source, the Giants are one of the teams on the 27-year-old edge rusher’s wish list as he heads to free agency. But according to another source, he could be looking at a contract worth $22-23 million per year, which will likely be out of the Giants’ range.

The Seahawks have the cap space to sign Clowney to this kind of massive deal, but it would eat up nearly half of their available money. Seattle also has to ask the question of whether it is prudent to sign Clowney to a deal of this size given his injury history and the other needs on the roster.

Even with Clowney, the Seahawks struggled to consistently get to the quarterback, but the star defender was clearly their best player on the defensive line. Some cite Clowney’s low sack numbers as proof against signing him to a long-term deal, but his impact on the game goes well beyond just stats. That said, the Seahawks may be better served to use this money to sign two to three players on the defensive line given the need to improve this area for next season.

Clowney Noted He Wants to Return to the Seahawks, But Is Also “Open to New Opportunities”

Clowney has consistently emphasized that he wants to return to the Seahawks, just as Seattle noted they are doing everything they can to try to retain the edge rusher. Clowney has also made it clear that he is expecting a big payday in free agency, and has not indicated he is willing to take less money to stay in Seattle. ESPN’s Josina Anderson reported that Clowney wants to stay with the Seahawks but is “open to new opportunities” if things do not work out.

“Just got off the phone with #Seahawks DE Jadeveon Clowney who is an impending UFA. Clowney told me, ‘after spending the last year in Seattle & seeing how they do things, I would definitely like to return. However, I’m also open to new opportunities if it comes down to that,’” Anderson noted on Twitter.

The Seahawks Asked Clowney for the Opportunity to Match Any Offer

Seahawks GM John Schneider admitted at the NFL Combine that they will ask Clowney for the opportunity to match any offer he receives. This does not necessarily mean they will have the most lucrative contract offer, but the Seahawks want the final opportunity to make the decision on Clowney’s future. Whether Clowney is wearing a Seahawks uniform next season likely depends on what the defensive end commands on the open market. 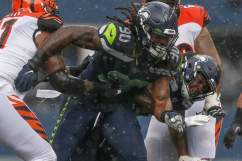 Jadeveon Clowney Interested in Giants, But Asking Price May Be Too Steep: Report