Getty Everson Griffen had been linked to the Seahawks.

As the Seahawks wait for Jadeveon Clowney, the front office is not putting all their chips on re-signing the big-time pass rusher. The Seahawks have made Vikings’ defensive end Everson Griffen their “primary fallback option” if Clowney leaves for greener pastures, per Sports Illustrated’s Corbin Smith.

“Per sources, Seattle currently views former Minnesota Pro Bowler Everson Griffen as the team’s primary fallback option if Clowney refuses to lower his financial demands,” Smith detailed. “The 32-year old defensive end opted out of the final three years of his contract in February and is ‘exploring’ the market.”

Smith explained that the Seahawks are interested in Griffen regardless of what happens with Clowney. There is a much more complicated scenario where the Seahawks re-sign Clowney and also bring in Griffen. Either way, Seattle’s front office needs to know how much (if any) the team will be paying Clowney next season.

“Even if Clowney re-signs, the Seahawks may remain in the mix for Griffen, though several moves would need to be made to open up necessary cap space to sign both players,” Smith detailed on Sports Illustrated.

Everson knows how to get to the quarterback and finished last season with eight sacks and 41 tackles in 15 games. The Vikings pass rusher has made the Pro Bowl four times and finished with double-digit sacks in three seasons.

The Seahawks Continue to Play the Waiting Game With Clowney

As free agency continues, there is still no word on where Clowney will sign. The News Tribune’s Gregg Bell reported that Clowney is also considering offers from the Jets and Titans. Multiple reports indicate that Clowney has been disappointed by the market. So much so, that Clowney could opt to sign a short-term contract with hopes of re-joining the free-agent pool sooner rather than later, per ESPN’s Jeremy Fowler.

Clowney is clearly the Seahawks plan A and likely even their plan B. The waiting game has gone on so long that the Seahawks have missed out on opportunities to sign other available pass rushers.

Dante Fowler, Robert Quinn and others are long gone by now leaving the Seahawks to pick from mostly scraps. The Seahawks have their own way of evaluating players, so it is unclear if any of the big-time free agents would have been targets even if Seattle’s negotiations with Clowney were not ongoing.

Griffen is one of the best available defensive ends on the market, and it is somewhat surprising that he has not signed a new deal given the contracts we have seen other defensive lineman receive. It is possible Griffen is also playing the waiting game right along with the Seahawks to see what Clowney decides.

Pete Carroll has a relationship with Griffen from their days together at USC. During a 2016 interview with the Star Tribune, Griffen praised Carroll’s coaching philosophy.

“Pete Carroll was all about hard work,” Griffen noted, per Star Tribune. “He ingrained hard work into his players. He was a great coach I had at USC. He did a lot of great things for the college and for the players and he was a great coach. He had enthusiasm and was a real good coach.” 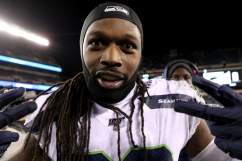