Getty Tom Brady has been linked to the Tampa Bay Buccaneers.

Tom Brady announced he is leaving the Patriots but his future for next season remains up in the air. The Buccaneers and Chargers are the two teams that have shown the most interest in Brady at the beginning of free agency. NFL Network’s Ian Rapoport reported that the Bucs have already offered Brady a new contract worth at least $30 million.

“The #Bucs made a strong offer to QB Tom Brady believed to be $30M or more. The #Chargers did, as well. And now, he’s leaving New England,” Rapoport noted on Twitter.

Prior to free agency, the Colts and Raiders were additional franchises linked to Brady. The Raiders agreed to terms with Marcus Mariota, and it would be surprising, at this point, if they pursued Brady. The Colts have been strongly connected to Philip Rivers and are “not a fit” for Brady, per ESPN’s Ed Werder.

“Despite appearing to be an ideal fit, I’m told the #Colts are not in the market for Tom Brady. It appears Philip Rivers a better possibility,” Werder tweeted.

The Bucs Emerged as the New Front-Runner to Land Brady

The Titans had a strong connection to Brady given head coach Mike Vrabel’s time playing with the quarterback in New England. Tennessee opted to re-sign Ryan Tannehill which took them out of the Brady sweepstakes.

Sports Illustrated’s Albert Breer indicated that the Bucs and Chargers remain the front-runners. Breer implied it is worth watching what happens to the market now that Brady is officially available.

“Both the Buccaneers and the Chargers have maintained an interest in QB Tom Brady. And as it stands now, that would…appear to be the market. Could that change? We’ll see,” Breer noted on Twitter.

The Buccaneers Have Plenty of Weapons for Brady

One of the critiques of the Patriots was the lack of weapons around Brady. The Bucs stand out among Brady’s potential suitors given the strong wide receiver tandem of Mike Evans and Chris Godwin. Tampa Bay also has tight end O.J. Howard to complete a trio of great receiving options. The Buccaneers have a quarterback-friendly coach in Bruce Arians that he could work with to build an offense for next season.

The Chargers have the appeal of allowing Brady to go back to his home state. It is hard to argue that the team has the weapons to compete with other suitors like Tampa Bay.

The 49ers Ruled Out Signing Brady

Brady had been linked to his hometown team in the Bay Area, but the 49ers are sticking with Jimmy Garoppolo, per NBC Sports’ Chris Simms. The former NFL quarterback indicated that Brady had narrowed down his list to the Patriots and Buccaneers. Simms called the Niners Brady’s “number one choice” prior to their decision to stick with Garoppolo.

With Brady confirming that he is leaving the Patriots, that leaves the Buccaneers as the top potential option for the veteran quarterback. It will be interesting to see if another team emerges prior to the opening of the free agency signing period. 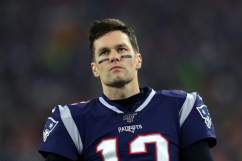