The next time we see Tom Brady on the football field he will not be wearing a Patriots jersey. Brady announced he will not be re-signing with the Patriots, but did not indicate where he is headed in free agency. Brady took to Instagram to offer two heartfelt messages to Patriots fans admitting his “football journey will take place elsewhere.”

Although my football journey will take place elsewhere, I appreciate everything that we have achieved am grateful for our incredible TEAM accomplishments. I have been privileged to have the opportunity to know each and everyone of you and to have the memories we created together.

Brady is free to sign with another team on Wednesday, March 18, but can continue meeting with additional franchises. Two teams that have been linked to the former Patriots quarterback are the Chargers and Buccaneers. Both the Titans and Raiders have already made moves to solidify the quarterback position. NFL Network’s Ian Rapoport reported that the Bucs have offered Brady a $30 million deal.

“The #Bucs made a strong offer to QB Tom Brady believed to be $30M or more. The #Chargers did, as well. And now, he’s leaving New England,” Rapoport noted on Twitter.

Sports Illustrated’s Albert Breer indicated that the Bucs and Chargers are the two front runners for Brady but wondered if more teams could get involved now that the quarterback is officially leaving New England.

“Both the Buccaneers and the Chargers have maintained an interest in QB Tom Brady. And as it stands now, that would…appear to be the market. Could that change? We’ll see,” Breer tweeted.

Brady finished his message by noting “I don’t know what my football future holds.”

I don’t know what my football future holds but it is time for me to open a new stage for my life and career. I thank you from the bottom of my heart and I will always love you and what we have shared- a lifetime full of fun memories.

It appears the Patriots were left a bit in the dark on Brady’s future. Rapoport reported that the Patriots asked Brady a series of questions but did not hear back prior to the Instagram message.

“The #Patriots stance was the same — what does Tom Brady want to do? Does he want to come back and is this where he think it’s the best place to win? When he never came back… that was where it stood. And Brady posted his goodbye,” Rapoport explained on Twitter.

NFL Network’s Michael Giardi reported that the Bucs have made it “loud and clear” that they want Brady to be their quarterback in 2020.

“I am told the Tampa Bay Bucs have made the intentions to Tom Brady loud and clear,” Giardi said on Twitter.

Brady did not specify why he is leaving the Patriots and the speculation has ranged from his relationship with Bill Belichick to simply wanting a new challenge. Whatever the reason, Brady will not be playing in New England next season unless it is for the visiting team. 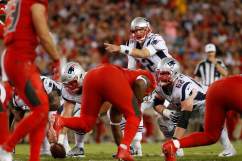