Could Jimmy G. to CeeDee soon be a thing? Considered by many to be the top wide receiver in a class loaded with talent at the position, Oklahoma wide receiver CeeDee Lamb has been linked to the 49ers in multiple mock drafts, and the standout wide receiver recently revealed he had a virtual meeting with the team during an Instagram Live session.

NFL Draft prospect CeeDee Lambs confirms that he has a virtual meeting with the #49ers via IG Live.

THE HIVE IS BUZZIN ??? pic.twitter.com/jb1rUTv2s5

After losing veteran wide receiver Emmanuel Sanders to the New Orleans Saints in free agency, the 49ers will be looking to complement second-year standout Deebo Samuel in the receiving game. While Sanders provided a savvy veteran presence, someone like Lamb would give Kyle Shanahan’s offense an explosive, immediate deep threat.

Kyle Shanahan Could Have a Field Day With Lamb 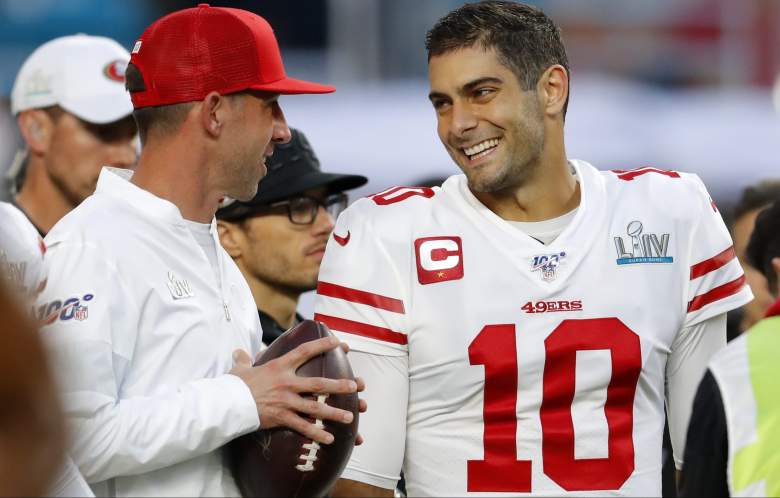 GettyHead coach Kyle Shanahan of the San Francisco 49ers talks with QB Jimmy Garoppolo. The 49ers could draft a wide receiver for Garoppolo to throw to in the first round of the NFL Draft. (Photo by Kevin C. Cox/Getty Images)

Fewer coaches — if any — in the league are better at scheming their receivers open than Shanahan. Adding someone with Lamb’s skill set to this offense would immediately make it better than it was in 2019.

The Draft Network said the following about Lamb: “Don’t get in this man’s way with the football. Runs ANGRY! Embarrasses soft tackle challenges and shows excellent open-field vision to break an angle across the grain and gallop into the open. Runs like a back pressing the LOS in traffic: explosive, heavy cuts before opening strides again … CeeDee Lamb projects as an alpha WR in the NFL. No, he doesn’t have elite top end speed, but Lamb checks damn near every other possible box. He’s smooth with his feet, possesses elite body control, vacuum hands and is a dynamic, angry runner after the catch. Experienced in manufactured touches, boundary and slot work, Lamb should step into an offense and be comfortable filling any possible role than a coach could give him. A top-shelf WR prospect and impact starter early on.”

Lamb has also noted that he has heard his name alongside some of the best playing the game today. “I get a lot of comparisons, honestly, but I just want to go out there and compete,” Lamb said in early March. Who has he been compared to? “DeAndre Hopkins. I’ve also seen Davante Adams. Like I said, those are great receivers; I’m honored.”

The 49ers have the 13th and 31st overall picks in the first round of the draft. Should they decide to use one of them on Lamb (he’ll likely be gone before the 20th pick), look for Lamb to have an immediate impact, similar to that of Deebo Samuel last year.