Getty Green Bay Packers QB Aaron Rodgers has been a major thorn in the side of the Chicago Bears. Did they just do him an inadvertent favor?

Brandon Marshall has never shied away from voicing his opinions, and in a recent appearance on The Herd with Colin Cowherd, the former Chicago Bears and Denver Broncos wide receiver shared his thoughts on everything from the potential return of troubled wideout Antonio Brown to former NFC North rivals Aaron Rodgers and the Green Bay Packers.

Marshall spent three years with the Bears (2012-2014), with his lone All-Pro season coming with the team in 2012. Marshall retired after the 2018 season and has been working as a football analyst since. When he and Cowherd were discussing the possibility of Antonio Brown’s return, Marshall said he felt adding Brown could give the Seattle Seahawks one of the best offenses in the NFL. Then, the subject turned to Green Bay and its recent history, and neither Marshall nor Cowherd held back.

Cowherd: Packers Have Not Been Aggressive at All  in Free Agency 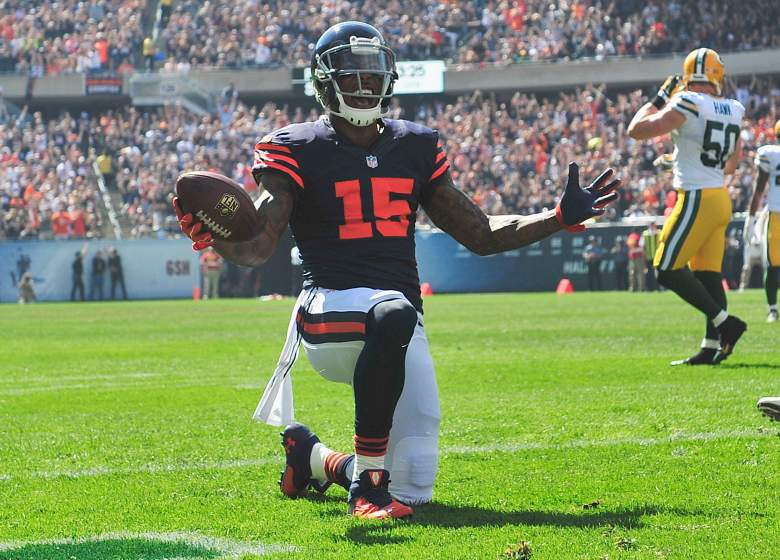 GettyFormer Chicago Bears wide receiver Brandon Marshall had the best season of his career with the team in 2012. (Photo by David Banks/Getty Images)

Cowherd began by noting how little action the Packers have taken in free agency, while also mentioning their tendency to let core veterans go.

“There’s a handful of teams, mostly the good ones, that are really aggressive. They go for it, get the stars. And then I watch Green Bay. And I sit there and I think to myself: they don’t have an owner. They let [Blake] Martinez the linebacker go. Bryan Bulaga, the left tackle, go. Jared Cook a couple of years ago. They could have had Khalil Mack. Brett Favre wanted Randy Moss. And I look at all these aggressive teams in the NFL. These new GMs, they want to make deals, they want to get stars, they want to pay money. They’re all aggressive. And there’s the Packers,” he said, which elicited a laugh from Marshall.

“Green Bay has got to change the way they do business,” Cowherd replied, noting the team had to start considering what its star quarterback wants moving forward. “It’s too late,” Marshall interrupted. “They should have won two Super Bowls in the last five years. To me, Aaron Rodgers is my favorite quarterback in the NFL. But you wasted this guy’s career. You got one Super Bowl out of Aaron Rodgers? Are you kidding me? It’s too late. It’s too late.”

Marshall May Have a Point…

Some may claim sour grapes courtesy of Marshall here — Rodgers is 19-5 against the Bears over his career, with Chicago losing 17 of its last 20 against Green Bay. But Rodgers hasn’t dominated other teams the way he has the Bears, and he is 18-10 in his career throughout the playoffs, going 5-2 at home, and 5-6 as a visitor.

Green Bay has made the playoffs nine times since Rodgers took over full time in 2008, putting together a string of eight consecutive postseason appearances, winning one Super Bowl in that stretch. The Pack missed the postseason in 2017 and 2018, but they were back on top of the North again last year, only to fall to the 49ers in the NFC Championship.

Cowherd’s assertion the Packers haven’t made enough moves to help propel Rodgers to another championship isn’t new; people have been saying this for years. The 36-year-old Rodgers has expressed a desire to finish his career in Green Bay, but after the team selected QB Jordan Love in the first round of the draft this year, it’s anybody’s guess whether that will happen. Either way, it seems time is running out for Rodgers and the Pack.

You can watch Cowherd’s full interview with Marshall below.