Minnesota Vikings safety Anthony Harris was not going to take one fan’s open  of his quarterback, and in typical Harris fashion, he did it with respect.

The 29-year-old safety commented on the Vikings Instagram post showing Kirk Cousins was ranked the 58th best player in the NFL Top 100, a list compiling the top 100 players in the league voted on by NFL players.

“As a FAN of a team, root FOR the players on that team and congratulate whatever success they have. (READ THAT AGAIN),” Harris wrote.

His comment was addressing the critics of Cousins who fail to acknowledge his achievement, and instead, comment only their grievances. Cousins’ career has been plagued by skeptics due to his primetime record and several other statistical arguments, albeit he has proven to be an elite passer in several categories as well.

Harris’ comment received thousands of likes as it was pushed to the top of the post’s comment feed. But one fan’s reply to him sparked a deep conversation with the fan who unknowingly was debating Harris.

Harris has been active on social media this offseason amid social unrest and a global pandemic and has maintained a peaceful and openminded presence.

Harris, whose social media handle is ironically @hoosdatdude, did not back down to one fan’s comments about his quarterback.

“What? Are you saying be a sheep and like anyone even though you don’t like them from their actions on and off the field?,” the Instagram user replied. “The guy is a joke who can’t win games. He knows how to run plays but can’t take the game and win it.”

Harris responded “I don’t think that makes the person a sheep if they don’t say anything downing the player when he’s done good but freedom of speech. Skol!!!” 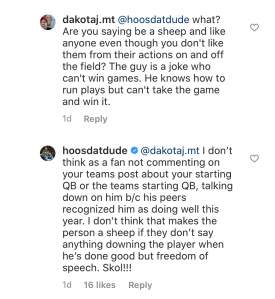 From there a debate ensued over fandom, freedom and speech and Cousins. Here are the following messages Harris and the fan exchanged:

FAN: freedom of speech doesn’t make said speech wrong and uneducated, clearly spoken by your current president homie. Whats cousins record? What about his record in the playoffs? What about record on prime time games? What about record against division opponents? Bro, the dude knows how to throw a ball, his peers said that, that says nothing about the ability to lead a team or win a game from your position. Overpayed, and evidently, over rated.

HARRIS: when I said freedom of speech, that doesn’t mean I’m crediting or discrediting what you said, it means I acknowledge and respect your opinion. My only suggestion was that if you are a fan of a team, (I think) you should also be nothing but supportive (uplifting) towards the players and teams regardless of situations but particularly celebrate the positive but all fans are entitled to their opinion and free to interact with their team or players how they choose.

FAN: born with purple in my veins… cheering for anyone just because they signed for an unreasonable amount of money, is blind loyalty. I appreciate that you like yardage totals more than a Lombardi trophy, but im tired of not being the best team. We were on our way with teddy or case. Hell a rookie would have been better than a 6th round pick who is 0-1 in the playoffs 1-21 in prime time games and had his best professional record last year at 10-6. I dont cheer for him, cause he does that for himself when he beats Brady one time… the dude probably just needs to believe in himself more im sure, but he hasn’t been able to do it this far, id rather cheer on literally any other qb (outside our division) than this douchbag of a QB… YOU LIKE THAT?!?!

HARRIS: haha you got it. My mom says “there are people in the crowd who are fans, spectators and then some who are haters.” I appreciate them all regardless of which path they pick.

FAN: think what you want, fans like wins. That isn’t new.

It was then that the fan realized who he had been arguing with and quickly leveled with Harris:

FAN: wow I didn’t even realize who I was arguing with. I’m an ignorant dummy. I still dont like kirk, but I thought I was talking to an uneducated fan. Sorry for the disrespect.

The fan admitted he respected Harris’ opinion, acknowledging he thought he was talking to an uneducated fan and apologized for “the disrespect,” while the post they had been arguing over was about the list which Cousins was voted onto by other NFL players like Harris.

Harris was met with resounding support as many fans on Reddit replied that the Vikings should extend his contract. He’s currently playing on a franchise tag and will become an unrestricted free agent next offseason.


Trevor Squire is a Heavy contributor covering the Minnesota Vikings and journalism graduate from the University of Minnesota — Twin Cities. Connect with him on Twitter @trevordsquire and join our Vikings community at Heavy on Vikings on Facebook.

Read More
Football, Minnesota Vikings, NFL
The Vikings star safety came to the aid of Kirk Cousins after one fan knocked his quarterback.