Miles was arrested along with another man after the January 15, 2023, shooting, according to Tuscaloosa police. The other suspect, Michael Lynn Davis, 20, of Maryland, is not affiliated with the university, police said at a press conference posted by the Tuscaloosa Thread. Miles and Davis are being held at the Tuscaloosa County Jail without bond, records show. Police have not said which man pulled the trigger.

The victim, Harris, is from Birmingham, Alabama, and was the mother of a 5-year-old son, according to her Facebook page. At the press conference, police said Harris was in a vehicle that drove away from the shooting and stopped to ask a University of Alabama police officer for help near the Walk of Champions outside Bryant-Denny Stadium. She was pronounced dead at the scene, police said.

In a statement, the University of Alabama said its “utmost priority is the safety and well-being of the campus community. We are grieved by the incident that occurred near campus last night and extend our deepest condolences to the victim’s family and friends.”

The statement added, “We are grateful for the quick and thorough response of law enforcement and emergency response teams and we will continue to fully support the ongoing investigation. We were made aware of the recent charge against student-athlete Darius Miles; he has been removed from the campus and is no longer a member of the Alabama men’s basketball team.”

“The University offers comprehensive emotional and mental health support resources. Through the holiday, members of the campus community can call UAPD at 205-348-5454 to reach the dean for support or to connect with emergency counseling services,” the university’s statement said. “On weekdays, the Counseling Center is available for students at 205-348-3863. Student Care and Well-Being can be reached at 205-348-2461, and faculty and staff have access to the Employee Assistance Program by calling 800-925-5327.” 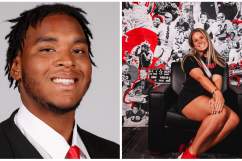 Tuscaloosa Police Said One of the Suspects Was Shot by the Driver of the Vehicle, Who Returned Fire

At the press conference on the afternoon of January 15, Tuscaloos Police Captain Jack Kennedy told reporters, “The driver reported that their vehicle had been shot into and he had also returned fire and believed that he may have struck a suspect. … It was quickly determined that the shooting did not occur on campus or at Bryan-Denny Stadium, that is just where the victim saw a marked University of Alabama patrol vehicle and stopped for assistance.”

Kennedy added that it was determined the shooting actually happened on the Strip in the area behind The Houndstooth Sports Bar. “We worked throughout the early morning hours and most of the day today, speaking to multiple witnesses, the surviving victim and utilizing a lot of our resources, in particular, video surveillance systems from businesses and we were able to develop two suspects,” Kennedy told reporters.

“We located both of those suspects earlier this morning. One was indeed found to have a non-life-threatening gunshot wound,” Kennedy said. He didn’t say which suspect was shot. “After treatment he was brought here as well. After investigation at this time both of those suspects have been charged with capital murder.” He said capital murder applies because of Alabama law regarding shooting into a vehicle.

Kennedy said, “Right at this time the only motive to this appears to be a minor altercation that these individuals had with the victim as they were out on the Strip.” He said they do not believe the victims and suspects had a prior relationship. “At this time we believe they just had an encounter, they got into some type of a minor verbal altercation as they were out and about on the strip,” Kennedy said.

Miles Is From Washington D.C. & Was a Junior Forward With the Crimson Tide

According to a cached-version of his now-deleted biography on the Alabama website, Miles was a junior forward with the Alabama basketball team. He is from Washington D.C. and went to Theodore Rooselvelt High School.

He played in 17 games during his freshman season and in 30 games in his sophomore year. He had played in six games this year, but Alabama had announced on Saturday, January 14, 2023, that Miles would miss the rest of the season with an ankle injury, according to Sports Illustrated.

According to AL.com, Miles was crying as he was led into the Tuscaloosa County Jail in handcuffs and said repeatedly “I love you” and “I love you more than you can imagine,” to someone standing outside of the jail.