UGA Athletics/@chandler_lecroy Instagram Devin Willock, left, and Chandler LeCroy were killed in a crash on January 15, 2023, the University of Georgia said.

Georgia Bulldogs offensive lineman Devin Willock and recruiting staffer Chandler LeCroy were killed in a crash on January 15, 2023, hours after the football team celebrated their National Championship with a parade, the university announced. Two others, both also members of the football program, were injured in the single-car crash, the school said.

The Athens-Clarke County Police Department said in a press release emailed to Heavy that the 24-year-old LeCroy was driving a 2021 Ford Expedition in the 900 block of Barnett Shoals Road at about 2:45 a.m. when the SUV left the road and crashed into “two power poles and several trees.” LeCroy was driving the Expedition southbound in the outside lane, police said.

Police said Willock, 20, was pronounced dead at the scene and LeCroy died of her injuries at a local hospital after being transported there by ambulance. A 21-year-old man and a 26-year-old woman, who were not identified, were seriously injured. They are in stable condition, according to the university. The crash remains under investigation, according to police.

Football Coach Kirby Smart Said ‘We Are All Heartbroken & Devastated’

The UGA athletic department said in a statement the “Georgia family is devastated by the tragic loss” of Willock and LeCroy. The statement added, “Devin and Chandler were two special people who meant so much to the University of Georgia, our football program and our athletic department. We ask that everyone keep their families in your prayers during this very difficult time. The UGA Athletic Association will work with our medical team as well as our mental health and performance personnel to make sure we are providing the best support possible for our staff and student-athletes who are processing this grief. We can provide no further comment at this time but ask that everyone continue to keep those involved in your prayers.”

Football coach Kirby Smart said in a statement, “We are all heartbroken and devastated with the loss of Devin Willock and Chandler LeCroy. Devin was an outstanding young man in every way and was always smiling. He was a great teammate and a joy to coach. Chandler was a valuable member of our football staff and brought an incredible attitude and energy every single day. We grieve with their families for this tragic loss and will support them in every way possible.”

Athletics Director Josh Brooks added, “We are covering the families of Devin Willock and Chandler LeCroy in prayer this morning. We are deeply saddened on the tragic loss of Devin and Chandler, and we will continue to honor their memory in the years to come. These two special people meant the world to our football program and athletic department. We are working with our medical staff and mental health and performance team to ensure our staff and student-athletes have all the support they need during this extremely difficult time.” 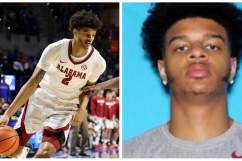 Devin Willock Was a Sophomore From New Jersey

Devin Willock was a redshirt sophomore offensive lineman from New Milford, New Jersey, according to his biography on the Georgia Bulldogs website. Willock played high school football at Paramus Catholic before joining Georgia in 2020.

Willock was a reserve offensive tackle in 2021 and saw his first collegiate action, according to the Bulldogs website. He then played in all of Georgia’s games in 2023, including as a right guard in the Bulldogs championship victory over TCU on January 9, 2023, according to Georgia’s website.

This is the type of young man Devin Willock was. Such a tragedy. https://t.co/2acDytspO2

Just hours before his death, a Georgia fan, Sam Kramer, posted a photo of Willock posing with his grandson after the victory parade. Kramer wrote on Twitter, “Special thank u to @DevinWillock for taking time for my grandson when he didn’t have to. U went out of ur way to make him feel special and U made his day!! Good luck next year! Go Dawgs!”

Chandler LeCroy graduated from the University of Georgia, according to her Instagram. She was working for the Bulldogs in the football recruiting department. On Facebook, LeCroy said she had worked as an assistant learning specialist in the athletic department.

According to her LinkedIn, LeCroy was a football recruiting analyst, assistant learning specialist and sports marketing promotions intern during her time working in the athletics department. She was a student ambassador while she was an undergrad and was also part of the Kappa Kappa Gamma sorority. LeCroy completed her degree in sports management in 2020 and finished her master’s degree in sports management and policy at Georgia in 2021.

LeCroy wrote on LinkedIn, “From a Leadership Graduate of Toccoa-Stephens County to a Double-Dawg graduate of Masters in Sport Management and Policy at the University of Georgia, my reliable organizational skills and strategic way of solving an array of problems are the two most obvious characteristics that justify my claim to be a motivated student who demonstrates a strong work ethic. I am searching for an opportunity that will provide me a platform to advocate for those who feel as if their voice gets lost in the crowd. I not only want to do things right, but to also find a position that will lead me to the right thing.”