Getty Stefon Diggs #14 of the Buffalo Bills looks on as he warms up before a preseason game against the Carolina Panthers at Bank of America Stadium on August 26, 2022 in Charlotte, North Carolina.

Just six days before the Buffalo Bills officially kick off NFL season with a primetime matchup against the Los Angeles Rams, the team’s No. 1 wide receiver, Stefon Diggs, stopped by The Pat McAfee Show, where he delivered a bold statement about quarterback Josh Allen.

With no apologies to Aaron Rodgers, Tom Brady, Patrick Mahomes, et al, “Allen, in my opinion, is the best quarterback in the league,” Diggs said “I’m not just saying that because he’s my quarterback. You’ve seen him have explosive, crazy games, you’ve seen run, jump over corners, run over DBs, challenge linebackers, step on the D-line. He’s a quarterback that provides the complete package. And he can throw the hell out of the ball. He’s a leader.”

Diggs also told McAfee the biggest change he’s seen in the Wyoming alum as the Bills prepare for the 2022 NFL season, a shift that will likely instill fear in opposing defenses.

“I’ve seen his approach change this year. He’s a playful guy. He has a lot of fun out there and kind of keeps things light. But this year, I feel like he’s taking that charge.” While Allen’s always been QB1, “He’s stepping into that realm of ‘I know I’m talented and I know what I can do. And I’m trying to do everything I can do to win.”

"In my opinion Josh Allen is the best QB in the league & I'm not just saying that because he's my QB" ~@stefondiggs#PMSLive #BillsMafia pic.twitter.com/MDRWDnuLgC

McAfee asks if Allen’s progression into a top-tier talent has been a natural evolution and Diggs answered by saying that the 26-year-old face of the franchise has become, “The man,” Diggs said.

“You can assume what you can get, but over the past couple years, you’ve seen the maturation process of a guy that keeps continuing to get better. And that’s what you want in a quarterback position, especially as a receiver, a guy that continued working at his craft, continued to try to put you in a position to really have success.” 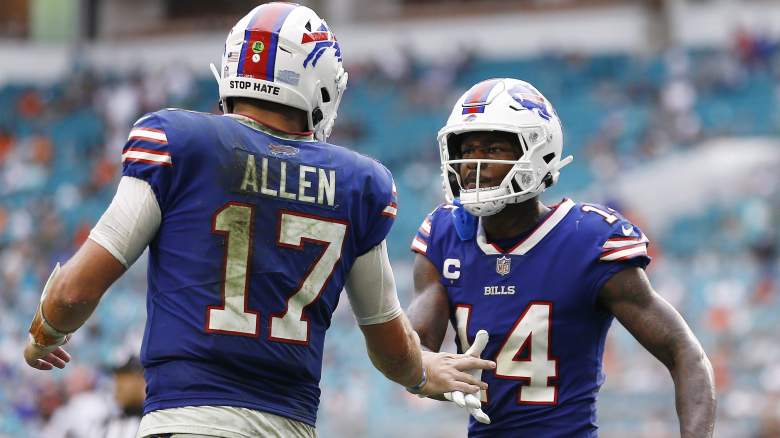 GettyJosh Allen #17 and Stefon Diggs #14 of the Buffalo Bills celebrate during the fourth quarter against the Miami Dolphins at Hard Rock Stadium on September 19, 2021 in Miami Gardens, Florida.

Diggs, who’s been named to to two consecutive Pro Bowls since joining the Bills, finished the 2021 NFL season with 103 receptions for 1,225 yards and 10 touchdowns, per Pro Football Reference. In 2020, he caught 127 yards for 1,535 yards and eight touchdowns.

The 28-year-old receiver told McAfee that he’s not surprised at Allen’s exponential progression. “I feel like it was inevitable. For the type of guy he is, and the work he puts in, he was bound to be the guy. It just happened sooner than later, I guess.” 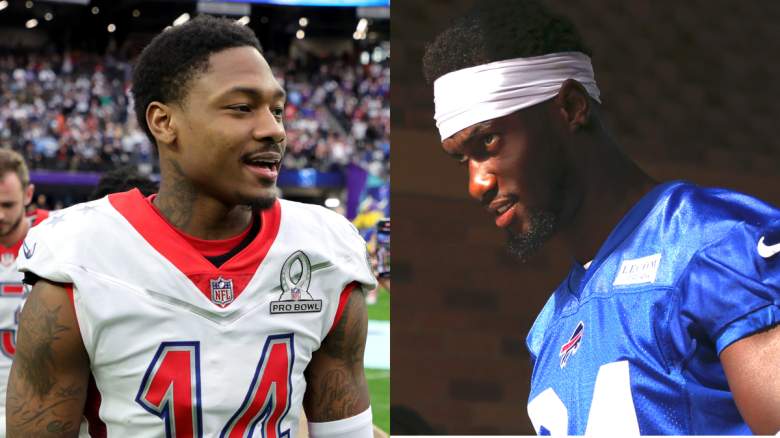 GettyThe Buffalo Bills 2022 first-round pick, Kaiir Elam (L), opens up about the quarrels between him and veteran Stefon Diggs (R).

Like Allen, Diggs is taking on a bigger leadership role this season with a particular focus on the team’s 2022 first-round pick, cornerback Kaiir Elam. While Diggs and Elam got into several heated altercations during training camp, the rookie said he appreciated the tough love.

“I’ve just got to compete my behind off,” Elam said. “I think me and Stefon have the same type of mindset, we just want to dominate and win, honestly.” As for the trash talking, “I appreciate it,” the young corner said. “But if he’s pushing me, I’m going to push back.”

The veteran receiver made it clear he’s not simply hazing the new rookie, but trying to get him ready for a seamless transition into the NFL, especially during a year where the team’s mentality is Super Bowl or bust.

“I feel like we got a lot to build off of, just as far as, like, a team and as a unit. As far as individual, he’s a good player,” Diggs said of Elam. “You know, he was drafted in the first round. Of course they’re going to expect a lot out of him immediately, but I feel like he’s up to the task and hope we can build off it.”

Even though Diggs still had two years left on his contract, Buffalo officially locked in their top receiver for the foreseeable future this offseason. Back in April, the Bills offered the Maryland alum a four-year extension worth $96 million, per Spotrac.com, which included a $21 million signing bonus and $70 million guaranteed.

After the new deal was announced on Twitter, Allen responded with a one-word response, “Yes.”

The Bills general manager Brandon Beane said the receiver’s easy chemistry with Allen was a huge part of locking him in. “I think the world of Stef, I think what he’s brought our team has been great,” Beane said, per ESPN’s Alaina Getzenberg. “He’s been great for Josh. He’s been great for our offense and his leadership has stepped up and we want to see [Stef] in Buffalo for years to come.”