Could this be the year Chicago Bears third-year wideout Anthony Miller finally breaks out? The former second-round pick out of Memphis has shown glimpses of potential over his first two seasons, but growing pains, inconsistent quarterback play and injuries have tempered him.

Miller had 33 catches, 423 yards and seven touchdowns his rookie season, and 52 catches, 656 yards and two touchdowns last year. He has yet to be a solid fantasy option, but a strong finish to the 2019 season and a newfound maturity bode well for Miller moving forward — as does the presence of Nick Foles.

To understand why Miller is going to surprise some people this season, we have to go back to 2019. During Weeks 11-17 of last season, Miller was sneakily one of the best slot receivers in the game. He was first in slot receptions (29), third in slot targets (40) and fifth in slot yards per route run (1.94).

During the final six games of 2019, Miller went on a tear. He had 33 catches for 431 yards and two touchdowns, including two 100+ yard games against the Lions and the Packers. Had he continued that production over a 16-game season, he would have had around 90 catches for 1,100 yards. He re-injured his left shoulder Week 16, and his season ended after that, but Miller was breaking out in a big way and seeing increased opportunities before he got hurt.

While some are rightfully wondering about how the Bears’ current situation at quarterback may hurt his fantasy bottom line, I’m here to tell you — whoever is under center won’t matter. Miller is going to produce in 2020.

Miller Has Matured On & Off the Field, Say Coaches

Miller already seems to have a good vibe going with Foles, and if (or when, as some believe) the veteran signal-caller takes the field at some point this season, look for Miller’s numbers to spike even more, because Foles loves to throw to the slot. From 2017 to 2018, Foles had the sixth-highest rate when it came to targeting slot receivers in the NFL. Considering Miller was 13th in the league in snaps at the slot position in 2019, this bodes well for his numbers. There are also the increased opportunities to consider.

According to Pro Football Focus, Miller has some of the best value in the league considering his fantasy draft position. PFF notes that Taylor Gabriel‘s departure should open things up even more, and they predict an additional 48 targets will go Miller’s way this year as a result. His coaches also trust him far more now than they did last year, with wide receivers coach Mike Furrey going as far as saying he thinks Miller is finally coming into his own.

“It’s just his continuing growth to understand what it takes off the field and how he’s got to prepare during the week to be successful and allow these things to happen during the game,” Furrey said a few weeks ago. “I really believe he’s learned it … This is the first year I can actually can sense there’s an intent there. He gets it.”

When to Draft Anthony Miller in 2020 Fantasy Football 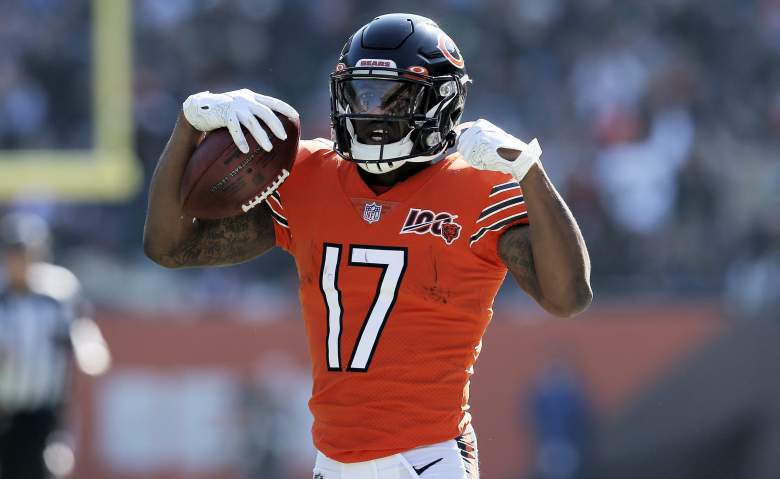 Miller has been ranked everywhere from the 43rd to 56th wide receiver in PPR leagues. FantasyPros currently has Miller ranked in Tier 8 at 108 overall, and as WR45.

FantasyPros also has the Bears’ receivers having the easiest fantasy schedule in the league this season. With Darius Slay and Xavier Rhodes both out of the NFC North this year, Miller should also have it easier when it comes to divisional matchups.

The primary concern with Miller heading into year three is his shoulder. He just had his second surgery in two seasons on the same left shoulder, and he hasn’t gone full-strength in padded practices yet. But he has a lot going for him, and if he can stay healthy, he could be worth taking earlier in Tier 8, or even in Tier 7, because I think he’s going to surprise some people. If you want to take him before you take Brandin Cooks or Will Fuller, you should, because I think his numbers will surpass theirs this season.

Whether it’s Trubisky or Foles, Miller will still see increased opportunities this season — and the Bears offense should be back to the middle-of-the-road mediocrity they showed in 2018.

Final Verdict/Prediction: Take him in Tier 7-8, and if you see him slide, snatch him up, because he’ll be a steal. I think Miller has his first 1,000 yard receiving season in 2020, with around 75 catches and seven scores. He’ll be a solid WR3 – Flex option with potential upside.