Khalil Mack is relieved facing Nick Foles is a thing of the past. The All-Pro linebacker of the Chicago Bears had his first conversation with the media since training camp began this weekend, and Mack revealed the first thing he said to Foles upon the veteran quarterback’s arrival in Chicago.

Mack was also asked his thoughts about the team’s current competition between Foles and Mitchell Trubisky, and while he refused to pick favorites, he did have a pretty bold prediction about the Bears’ 2020 season.

Mack is 0-2 in His Career vs Nick Foles… 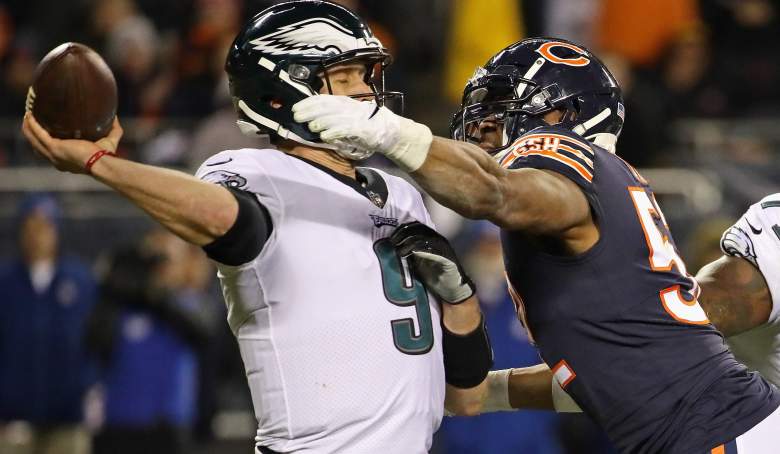 Mack told reporters about his first interaction with Foles after the quarterback joined the team. “As a guy, first off the field, that first interaction was: ‘Damn man, I’m glad I don’t have to play against you no more,'” he said.

Throughout his career, Mack is 0-2 against Foles, including the Bears’ 2018 Wild Card playoff loss. Mack had no sacks on Foles in those two games, either, so the quarterback likely stands out a bit.

When Khalil Mack saw Nick Foles for the first time, he said, "Damn, man, I'm glad I don't have to play against you no more.”

Fun fact: In two career games against Foles (including the Bears playoff loss), Mack has 0 sacks, and Foles is 2-0.

Mack also added that Foles always left a very good impression. “Going back through memory lane about all the games that we have played against each other and what [he] did, just the type of guy he is, he’s a hell of a guy, just the right type of guy, man.”

After he complimented Foles, Mack was asked his thoughts about the team’s competition under center. He was diplomatic, saying he didn’t want to get into it, really — but he then made a pretty bold prediction, considering the team’s current quarterback quandary.

“I can’t really get into the whole QB competition thing, but all in all, man, the two guys that are up for the job — whatever they decide to go with, we’re gonna be ready. We’re ready to win a lot of ball games, and I can’t wait,” Mack said, adding: “Whether it’s 9 or 10, we’re gonna win.”

The Bears were 12-4 in 2018 before regressing on both sides of the ball in 2019, falling to 8-8 and failing to make the playoffs. Their offense was the primary reason for the team’s struggles, exhibiting myriad problems: poor quarterback and offensive line play, questionable play-calling, non-existent tight ends and zero commitment to the run game were all huge issues.

While the team has revamped the tight ends room (and early word from training camp has been quite good), and traded for Foles, they haven’t done much to fix their offensive line, and Matt Nagy, while being an excellent leader, still hasn’t been a consistently good play-caller. Also — after the media got glimpses of both quarterbacks over the last week, neither has dazzled or even stood apart as the clear-cut winner. Mack must be pretty confident in the Bears defense — or perhaps he knows something no one else knows about Trubisky and Foles.

So the #Bears QB situation… pic.twitter.com/JcNCMSs1Lg

I’ve said all along, I want the #Bears to start the better QB. I thought that would be Nick Foles. Through 4 practices, it appears to be Mitch Trubisky.

I just hope that whoever wins the job will be good enough to improve the offense. That I’m still skeptical about.

1. Mitch Trubisky has shown little (if any growth).
2. Nick Foles looks more like Jax Foles than Philly Foles.
3. When you hear "Tyler Bray has made the best throw in camp" it isn't ideal. https://t.co/EyxnCfxevM

From what I've been seeing and hearing from #Bears reporters, it sounds like Mitch Trubisky is currently winning the QB competition. Although Trubisky has made some questionable mistakes, he has been more consistent. Also, Nick Foles hasn't done anything to separate himself. pic.twitter.com/zP2OTka9Jm

You can watch Mack’s interview with the media below: