The Mitch is back in Chicago, as head coach Matt Nagy and the Bears made it official Friday, announcing Mitch Trubisky would get the start against the Green Bay Packers Week 12. It will be a huge game for the Bears, with both playoff and divisional implications, and it will be huge for Trubisky, as well, as it represents his one final shot to be the guy in Chicago.

The quarterback spoke with the media for the first time since he was benched Week 3 in favor of Nick Foles, and he had a lot of revealing things to say, particularly about how being benched made him feel and helped reshape his mindset. Whether the move made him better in any way remains to be seen, and it won’t take long to find out, as Trubisky and the Bears have a huge divisional game coming up Sunday night. Trubisky also had some telling things to say about the team’s coaching staff, as well.

Trubisky: ‘I Felt Like I Was on My Own’

“When you’re not in the starter role, people aren’t paying attention to you as much,” Trubisky said. “They’re not catering to how they want you to get better or evolve, so there was a little bit where I felt like I was on my own. I was like I got to find ways to continue to push myself and get better. I think I actually thrive in an environment like that because it’s back to where you want to be, where you want to go, what you want to do with your career.”

Trubisky was candid in his 10-minute interview, also discussing the little things he did as a backup he didn’t necessarily get to do when he was the team’s starter. “I was testing throws that I wouldn’t normally test if I was taking the starter reps,” he said. “I feel like I was progressing as a player. I was just in the space where I wanted to push myself and continue to get better.”

Perhaps the most revealing thing was what he said about his communications with the team’s offensive coordinator and new play-caller, Bill Lazor.

Trubisky: ‘I Want to Make Sure These Coaches Are Hearing What I’m Saying’ 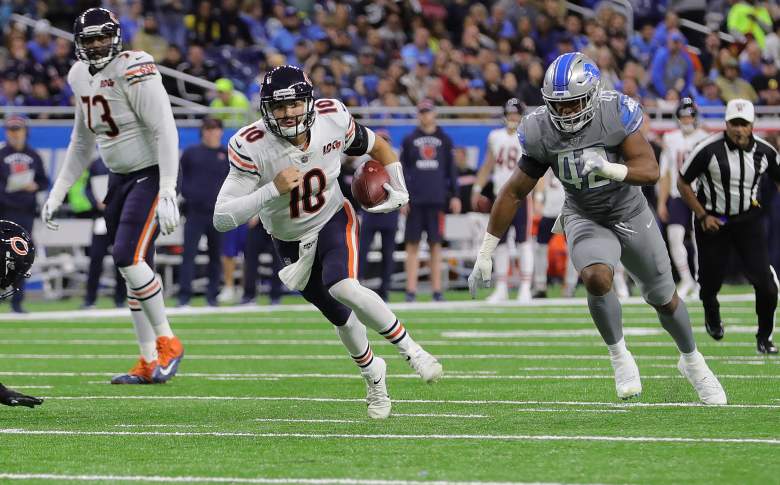 “The main thing just coming back — I just want to make sure that these coaches are hearing what I have to say and taking into factor the input that I want to have in this offense coming back and just running things that I’m comfortable with and things that I feel like will have success this weekend,” Trubisky noted. This seems key for several reasons.

In the first three games of the season — all of which Trubisky started — the Bears ran for 149 yards, 135 yards and 130 yards. They have yet to hit the 100-yard mark on the ground since, and while they did play some of the better defenses in the league after Week 3, their offense is still one of the league’s worst.

Trubisky’s impact on the team’s running game is undeniable; Defenses have to account for his mobility in ways they didn’t with Foles. Mitch is also still the team’s third-leading rusher, and he hasn’t played one snap since Week 3. It’s telling Trubisky mentioned making sure the coaches were listening to his input, which likely involves more rollouts and designed runs — but whether they listen will be equally telling. If the Bears look more like they did Weeks 1-3 against the Packers, it’s clear they listened to Trubisky. If not, it’ll be clear they don’t much value his input, either.

Trubisky Also Wasn’t Happy About How He Was Benched

“More than anything, I was caught off guard,” Trubisky said when asked how it felt to be benched. “I think at the beginning of the season, I was just starting to build some momentum, and then it kinda felt like a blind side. Then, I decided to embrace the new role. The first couple of days, it sucked being in that role, but I was trying to keep perspective and think long term. I want to play in this league a long time, and if I want to do that, there’s things that I just need to continue to get better at.”

At the time of his benching, Trubisky also noted that it wasn’t head coach Matt Nagy who broke the news, but offensive coordinator Bill Lazor, which seems odd, considering how much the Bears’ head coach has publicly discussed how strong his relationship is with Trubisky.

For his part, Nagy said the following Friday about Trubisky getting the nod against the Packers Sunday:

“I think our coaching staff sees it and feels it with him with this week of practice he’s had. All we can say is: ‘Hey, go out on Sunday night, cut it loose, have fun, you know, and may whatever happen, happen.’ But I know one thing, he is extremely prepared and when you prepare, usually good things happen. So that’s what’s exciting for us.”

It won’t be long until we see what that preparation looks like, and it will be interesting to see how this Bears offense responds with Trubisky leading the way again.

Read More
Mitch Trubisky, NFL, Nick Foles
The Mitch is back...and it's going to be a telling time for the Bears coaching staff.