Christmas has come and gone, and the Chicago Bears have received the ultimate gift courtesy of the San Francisco 49ers, whose 20-12 win over the Arizona Cardinals Saturday put the Bears in the driver’s seat for the final seed in the NFC Wild Card race.

With just two games left in the regular season, Bears quarterback Mitch Trubisky has also been given another gift with significant meaning from his girlfriend Hillary Gallagher. Gallagher, who posts photos of her life with Trubisky frequently on Instagram, first went public with their relationship in February of 2019.

Gallagher works in marketing and as a private pilates instructor according to her Instagram page, and she recently revealed what she gave the Bears quarterback for Christmas this year. Spoiler alert: His Airness is involved…but the city of Chicago is not.

Gallagher gifted Trubisky with a framed photo of legendary basketball player Michael Jordan clad in his college uniform with a quote that read: “Some people want it to happen, some wish it would happen, others make it happen.” 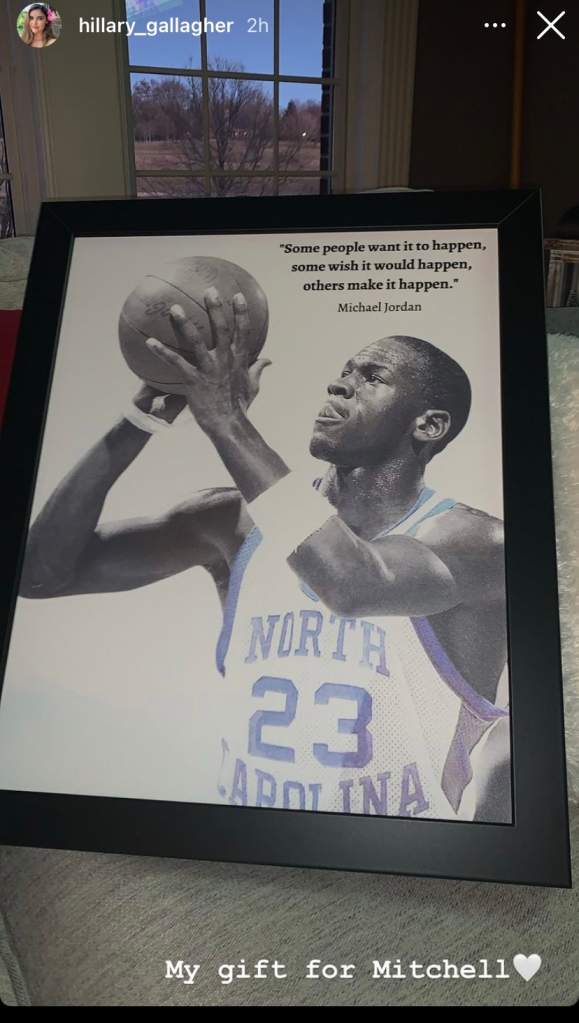 Jordan and Trubisky have a few major geographical areas in common, primarily North Carolina, where they both attended college and spent time as Tar Heels, and Chicago, where each of their professional careers began. Interestingly, Gallagher chose an image of Jordan, one of Chicago’s most famous and beloved athletes, in his college attire as opposed to his more famous Bulls jersey — particularly in light of the recent comments from Trubisky about his future in Chicago.

Still, the quote has obvious significance for Trubisky, who was benched Week 3 only to come back Week 12 and play the best football he has played since 2018. In his last four games, Trubisky has thrown eight touchdowns and three interceptions, and he has a rating of 101.9. If he and the Bears can somehow manage to play spoiler in the postseason, the fourth-year quarterback could help script the ultimate ending — or beginning — in Chicago.

To secure a spot in the postseason, the Bears will need to win out and beat both the Jacksonville Jaguars and the Green Bay Packers Weeks 16 and 17. They can also go 1-1 and have the Cardinals go 1-1 in the two remaining games and still sneak into the playoffs.

For his part, Trubisky likes where the team has been going in recent weeks. “There’s really good camaraderie right now. Just an intensity and focus that I like to see. We’re in a good spot, and we’ve just got to keep that going,” Trubisky said last week.

“Guys are buying into it. There’s more passion and excitement at practice over the last few weeks. We feel like we like we keep getting better every single week and when you keep getting better and guys get more experience, um, playing together, 11 as one, I think that’s when guys just really gain confidence and then you’re just able to go out there and play free and play loose and play the way that we know we’re capable of playing.”

Much will be determined by Trubisky’s play over the next two games — for the fourth-year quarterback’s future and for the future of the Bears, as well.

Loading more stories
wpDiscuz
0
0
Would love your thoughts, please comment.x
()
x
| Reply
What's interesting is that she chose the North Carolina connection as opposed to the Chicago one...