Getty The Bulls have decided to not give Kris Dunn a qualifying offer, signaling his release in the near future.

Under new leadership, the Chicago Bulls are wasting no time trimming what will not fit the future the new front office has envisioned.

The duo will reach unrestricted free agency on Friday. While there still is time for the Bulls to strike new deals with Dunn and Harrison, it appears the new regime is committing to moving on from the former tenants of the franchise.

Dunn, the fifth overall pick of the 2016 draft, was a two-time Big East Defensive Player of the Year winner at Providence during his college years and developed into a tenacious lockdown defender under Jim Boylen.

Dunn, who played in 51 games last season before suffering a knee injury, ranked second in steals per game last season (2.0) and had the highest steal percentage in the league (3.83%). Dunn received four first- and 23 second-team votes for the All-Defensive teams — the most points by a player not named to either team.

Dunn leads the NBA with 100 steals and has joined Michael Jordan and Scottie Pippen as the only players in franchise history to record 100 steals in the first 50 games of a season. pic.twitter.com/dYBReeqt7i

In 149 games with the Bulls over three seasons, including 119 starts, Dunn averaged 10.4 points, 5.1 assists and 1.8 steals per game. Dunn averaged a career-low 7.3 points per game last season and shot 25.9% from three-point range.

Dunn’s shooting struggles do not mesh with the vision new executive vice president of basketball Arturas Karnisovas and general manager Marc Eversley have for the team that will look to fill the roster with two-way players who can pass and shoot.

“I like high pace, moving the ball,” Karnisovas said in April after his hiring. “We were a very good passing team in Denver. It’s a very entertaining brand of basketball. I like multi-positional players. I like guys with high basketball IQ that play off each other, a read and react offense.”

Johnson reported that the Clippers “are among several teams expected to show interest” in Dunn. 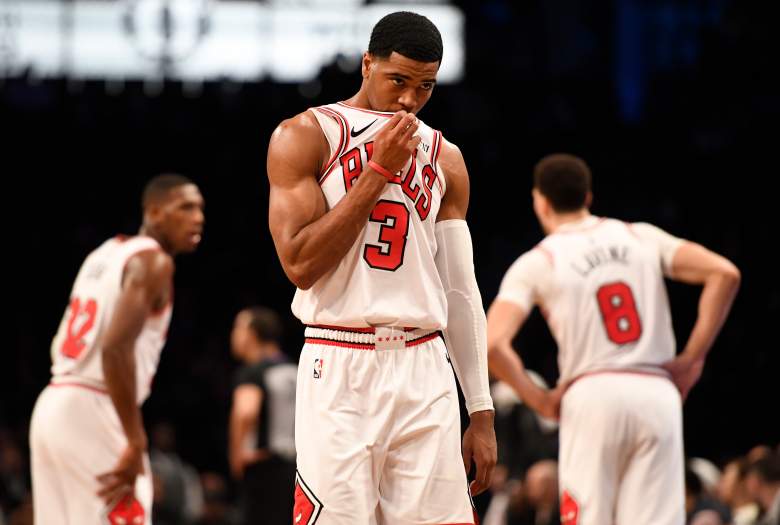 GettyHarrison posted one of his best seasons as a pro in 2020.

Harrison has yet to find his home in the NBA after being undrafted in the 2017 draft. He was picked up by the Phoenix Suns and later released in 2018, leading to the Bulls acquiring him.

Averaging 11.3 minutes per game last season, Harrison did impress in a supporting fashion. He led the NBA in steals per 36 minutes (2.1) and showed heart and hustle when on the floor.

He also drastically improved his 3-pointer percentage from 27.1% to 38.1% and was trending in the right direction before the 2020 season was suspended.

Keeping Harrison would be a much more affordable option for the Bulls than Dunn, but while roster spots are still a premium, the team may be trying to clear space for players drafted on Wednesday or potential free agents starting Friday.

Read More
Chicago Bulls, NBA
The duo was among the NBA's top defenders a season ago.