Baker Mayfield has had it out with Fox Sports radio host Colin Cowherd during his time in the spotlight, even before he took his first snap under center with the Cleveland Browns. But in light of recent comments made by the Hesiman winner, Cowherd is claiming victory in his battle with the former No. 1 overall pick.

Mayfield recently was quoted as saying he “lost himself” last season as the Browns stumbled to a 6-10 record and he failed to put up numbers after a stellar rookie season. That was music to Cowherd’s ears, who felt like he’s been saying that all along.

“Cleveland has low sports self-esteem, and they’re kind of embarrassing,” he said on The Herd this week. “The Indians can’t win a series, the Cavs without LeBron are a mess, and the Browns are the laughing stock of the NFL. Last year they just kept fighting me, and fighting me, and fighting me, when I said, ‘Your GM talks too much.’ He got fired. I said, ‘Your coach was a bad hire and had never been a high school head coach.’ He got fired. And I said ‘Baker is a mess, he looks fat, he’s not focused, and he was a reach at No. 1.’ I was right for all three, and now Baker is admitting it.”

Here’s the quote Cowherd is referencing from Mayfield: “I wouldn’t say it is a ‘poor me’ type situation. Going and having success all through high school and college and having that standard so high and then the past couple years have been a rollercoaster of emotions and not nearly as much success as I am used to. I would say I lost myself not having that success, not finding out what was working. I tried different ways of trying to have that success, and I didn’t find it. I lost myself in that, and I wasn’t able to be who I am for these guys on the team. I have told them that, and I told them that if I am not doing that, hold me accountable. Just finding that and getting back to the basics, establish myself in this new system and attack it..” 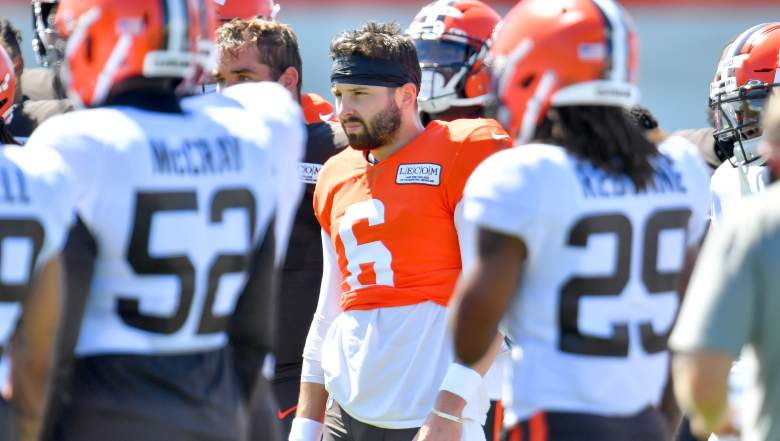 After gaining some MVP hype in the preseason following a record-setting rookie year, Mayfield finished his second season in the NFL with 3,827 yards, 22 touchdowns and 21 interceptions, ranking next-to-last in both passer rating (78.8) and completion percentage (59.4%).

Off the field, Mayfield and Cowherd have had their battles, but the Browns QB has mostly chosen to remain silent recently when it comes to the hot takes. Cowherd, however, has only jumped up the volume on his takes with Mayfield stumbling.

“In the history of the NFL find me a legendary quarterback with a college police video, who called out his medical staff, who called out a teammate who wanted more touches, and even who has an adversarial relationship with his own media. The answer is of course Zero.

“I said that if you have bad judgement in college it’s going to follow you to the NFL because the NFL is just harder. Johnny Manziel is now out of the league, a bust. Jameis is now a backup, and Baker Mayfield is a mess.”

Browns Are Confident in Baker Mayfield to Turn it Around

Regardless of what Cowherd thinks, the Browns have faith that Mayfield can turn it around. Mayfield knows that his third year will be vastly important for his NFL future, with the team facing the decision to pick up his fifth-year option this offseason.

Browns head coach Kevin Stefanski visited Mayfield this offseason in Austin, Texas and has been very complimentary of his new QB.

“I see a very committed football player who is ready to lead and who is excited to play,” Stefanski said during camp. “He understands what we want him to do in this offense. He’s doing it on the field. Just watching him get through the cadence and kind of line people up, he clearly has done the work.”

Mayfield is relying on “Mamba Mentality” to bring back his killer instinct.

“Being myself, getting that alpha mentality back. 2020 has not been real great. Mamba mentality – RIP to Kobe (Bryant), but trying to get that and replicate something similar to what he had to lead these guys to where we want to go.”