The Cleveland Browns gave Antonio Callaway multiple chances during his short tenure with the team, but the franchise eventually decided to part ways with their fourth-round pick from the 2018.

Callaway is now getting one more chance to revive his career and he’s doing it in the state he made a name for himself in. Callaway — a Florida native who played his college football at the University of Florida — signed with the Miami Dolphins practice squad on Sunday, giving him another chance at making an NFL roster.

“I’m so proud of the work Antonio has done in the last several months to put himself in this position with a second chance with his hometown team,” Callaway’s agent Malki Kawa told NFL Network’s Ian Rapoport.

Callaway is suspended the first 7 games, but can attend meetings and do his injury rehab. Agent @MalkiKawa tells me: “I’m so proud of the work Antonio has done in the last several months to put himself in this position with a second chance with his hometown team.” https://t.co/2WYx3NSsHD

Callaway has been documenting his return on Instagram. He recently deleted all his previous posts except one with the caption: “Everybody you see in these videos believe in me!” He’s the only one in the videos.

Everybody you see in these videos believe in me!! 🦍💪🏽

The Browns selected Callaway out of Florida in the fourth round in 2018 with the 105th overall pick. He was a controversial choice, having a spotty history with the Gators, but recorded a solid rookie season, catching 43 balls for 586 yards five touchdowns last season.

Callaway was suspended for the entire 2017 season at Florida for his role in a credit card fraud scheme and was also charged with marijuana possession and was the subject of a sexual assault investigation during his time in Gainesville.

Callaway was suspended for the first four games of last season and released a statement through the Browns shortly after the news broke of his suspension.

“I take full responsibility for my actions. I made a mistake and I own that. I have taken the steps to make myself better and I appreciate the Browns standing by me and supporting me during this time. I know there’s nothing I can say to regain trust; it will all be about my actions.”

That however never happened, and the team was forced to cut ties with Callaway after news of another lengthy suspension for a failed drug test and he was a less than ideal locker room presence, reportedly showing up late to meetings and practice. 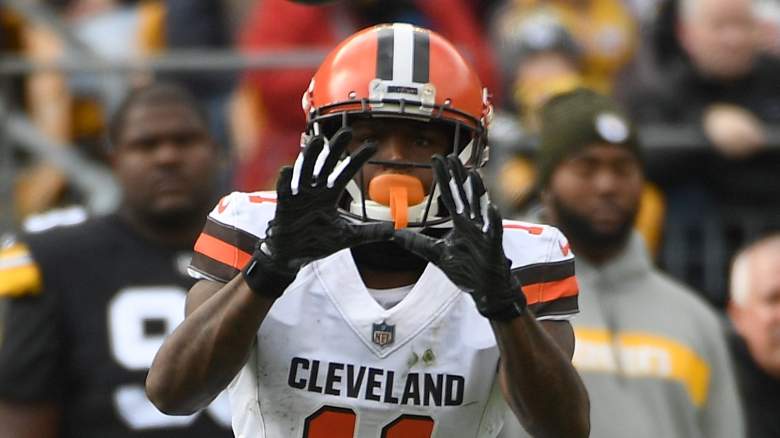 The Dolphins might eventually get the services of the speedy Callaway, but he has to serve out his suspension first. Before he can get on the field, Callaway has to sit out seven games. NFL.com has reported that he can still attend meetings and go through injury rehab.

Callaway had a small stint in the XFL before the league folded due to the COVID-19 pandemic. He suffered a leg injury before playing a game with the Tampa Bay Vipers.

Callaway was then cited in a contract dispute between XFL commissioner Oliver Luck against Vince McMahon.

“Luck signed Antonio Callaway in clear violation of the XFL’s policy and McMahon’s directive not to hire players with questionable or problematic backgrounds,” the motion revealed, per ESPN. “After McMahon learned of Callaway’s background and directed Luck to terminate Callaway, Luck failed to do so. As a result, Callaway was allowed to continue to practice and sustained a knee injury that caused the XFL to incur substantial costs that would have been avoided if Luck had followed the applicable policies and directives.”